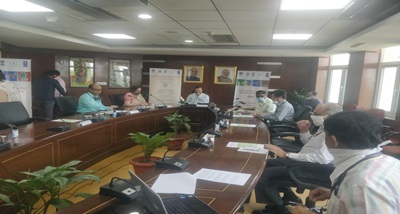 in National May 22, 2020 Comments Off on India has preserved around eight pct of World’s Bio-diversity: Prakash Javadekar 426 Views

Newdelhi:22/5/20: Minister for Environment, Forest and Climate Change Prakash Javadekar today addressed the Virtual Celebration of International Day for Biological Diversity in New Delhi. In his address, Mr. Javadekar said, India has 2.5 percent of world’s landmass, 16 percent of Human and 16 percent of cattle population, but it has still preserved around eight percent of world’s biodiversity as Indian philosophy has always preached about the world as a family and living with nature.

The Minister expressed happiness that many universities are giving certificates and degrees in Biodiversity.  He said many steps are being taken to preserve biodiversity. He said, government has passed Bio-diversity Act in Parliament and since 2014, every Panchayat maintains Bio-diversity register.

On the occasion, the Minister launched Bio-diversity Samrakshan Internship programme.