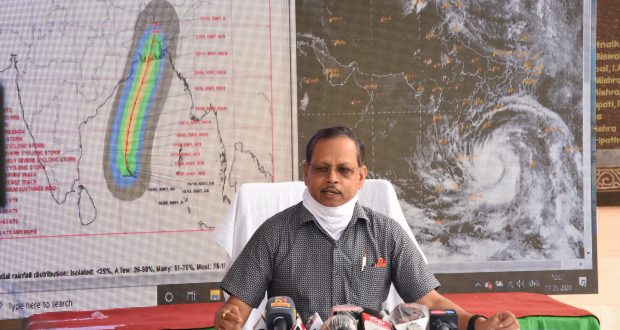 in State News May 21, 2020 Comments Off on Government of Odisha has thanked IMD Director General for the accurate predictions on severe cyclonic storm Amphan 402 Views

Bhubaneswar:21/5/20: Government of Odisha has thanked IMD Director General Mrutuyanjaya Mohapatra for the accurate predictions on extremely severe cyclonic storm Amphan. This has helped the state to handle the emergency situation more efficiently.

The Odisha government evacuated over 1.41 lakh people living in low-lying areas. They were accommodated in 2,921 shelters where cooked food and other facilities were provided, Jena said.

Two persons died in Kendrapara and Bhadrak during the cyclone. A three-month-old child died in Tihidi area of Bhadrakh, an old lady of 67 years who died in her house due to natural causes.

District Collector of Kendrapada Samarth Verma said Rs 12,000 was given as immediate relief and detailed inquiry will be conducted soon.

Jena said the assessment of damage caused by the cyclone will be made. He said many betel vines have also been damaged in Dhinkia area of Jagatsinghpur district. Thirty-six teams of NDRF and ODRAF were pressed into service in 12 coastal districts.

2020-05-21
Editor in chief
Previous: Evaluation of annual HSC Examination, SOSC, and Madhayama Examination will resume from May 26
Next: Odisha government is mulling on allowing home-delivery of alcohol