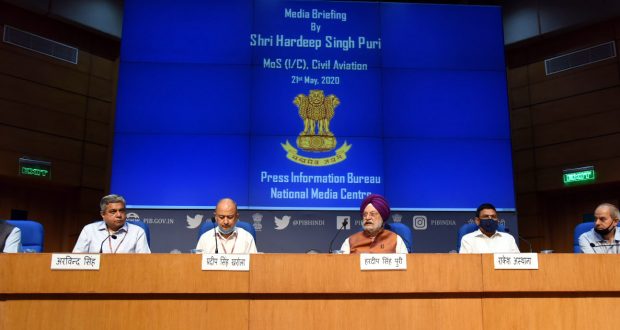 in National May 21, 2020 Comments Off on Civil Aviation Ministry issues guidelines for airlines, airports and passengers on domestic flight 457 Views

Newdelhi:21/5/20: Civil Aviation Minister Hardeep Singh Puri has announced that domestic civil Aviation operations will restart from Monday in a calibrated manner. The flight operations were suspended from 25th of March due to the imposition of lockdown. Addressing media in New Delhi, Mr Puri said, the domestic flight operation will resume to a limited extent of required and approved summer schedule. The Minister said, for a journey between 90 to 120 minutes the minimum fare will be 3,500 rupees and maximum would be 10,000 rupees. He said, in case of Delhi- Mumbai flight, 3,500 rupees will be the minimum fare and maximum will be 10,000 rupees which will be operative till 11:59 PM on August 24.

He said, there will be no physical check-in at airport and only web check-in will be allowed. He said a self-declaration or Aarogya Setu App status on a compatible device would be obtained to ensure that a passenger is free of COVID-19 symptoms. He said, passengers with red status on Aarogya Setu App will not be allowed to travel. Passengers will have  to wear face mask and carry sanitizer bottles

Mr. Puri said, for flight operations, one-third capacity of approved summer schedule 2020 will be allowed to operate. Mr Puri said, the Ministry has divided the air routes in 7 sections based on flight duration.

2020-05-21
Editor in chief
Previous: CCI approves acquisition of Emami Cement Limited by Nuvoco Vistas Corporation Limited
Next: Odisha Chief Minister made an aerial survey of the cyclone-affected districts of the state