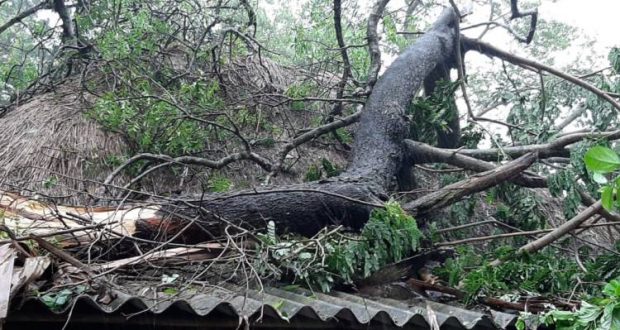 in State News May 20, 2020 Comments Off on Cyclone Amphan has left a trail of destruction in several coastal districts of Odisha 506 Views

“We have received reports of death of a child in Tihidi of Bhadrak district. The Collector has sent a team comprising of tehsildar, medical and police officials. The body has been brought for post mortem, following which the cause of death can be confirmed,” said the SRC.

Besides, a 67-year old person has died in Satabhaya area of Kendrapara district. An inquiry has been ordered into the incident, he added.

Cyclone Amphan impact on Odisha has subsided now. The pre-positioned teams are engaged in cutting uprooted trees and clearing roads in affected districts, the Odisha SRC said adding that efforts are on to restore power connections soon.

The Collectors of the affected districts have been asked to submit Cyclone Amphan damage assessment report within 48 hours. The primary report will be submitted within 48 hours following which the authorities have to submit a final report, Special Relief Commissioner further informed

2020-05-20
Editor in chief
Previous: UPSC will announce new dates for the Civil Services Prelims exam 2020 on June 5
Next: Envoys of Seven Nations Present Credentials to President of India through Video Conferencing