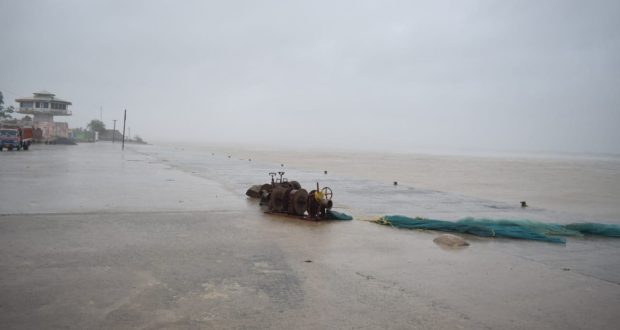 in State News May 20, 2020 Comments Off on ‘Amphan’ hurtled towards the coast, heavy downpour coupled with high-velocity winds pounded in coastal Odisha 394 Views

More than 1.25 lakh people have so far been evacuated from low-lying coastal areas and the process of evacuation was still underway in some places like Balasore on Wednesday morning, Special Relief Commissioner (SRC), PK Jena, said.

The current intensity of wind speed near the centre of the system stood at 170 to 180 kmph, while the wind velocity near Paradip was 102 kmph. Near Chandbali the wind speed was 74 kmph, he said.

It is likely to move north-northeastwards across northwest Bay of Bengal and cross West Bengal  Bangladesh coasts between Digha (West Bengal) and Hatiya Islands (Bangladesh) close to Sunderbans during evening hours of Wednesday, with a maximum sustained wind speed of 155-165 kmph gusting to 185 kmph.

The impact of Amphan will remain in the state till the afternoon, he said, adding that the wind speed in some places is expected to reach 100 kmph to 110 kmph gusting to 125 kmph in northern coastal parts of Jagatsinghpur, Kendrapara, Bhadrak, Balasore and Mayurbhanj districts during the period.

Reports of trees and electric poles being uprooted and ‘kutcha ‘ houses being blown away are coming in from various parts of the district. However, there has been no major damage to life and property so far.

Amphan is considered to be the second major cyclonic storm in the Bay of Bengal after the Super Cyclone of 1999 which had claimed around 10,000 lives and inflicted large scale devastation in Odisha.

The cyclone comes a year after Fani barreled through vast parts of Odisha May 3, claiming at least 64 lives and destroying power, telecom and other vital infrastructure.

2020-05-20
Editor in chief
Previous: A man who was in quarantine at a facility in Nayagarh district died
Next: Lakhs of people have been evacuated in Odisha and West Bengal in view of Cyclone Amphan