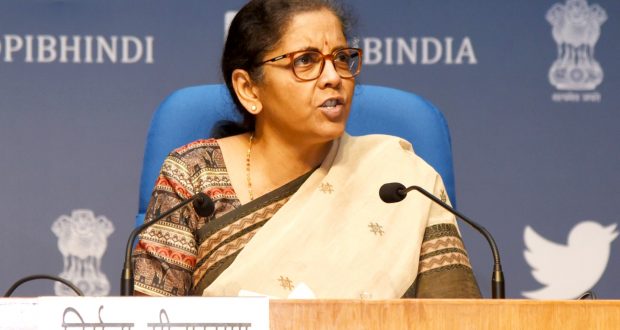 The Union Minister for Finance and Corporate Affairs, Smt. Nirmala Sitharaman holding the 4th press conference to announce the details of special economic package, in New Delhi on May 16, 2020.

In a major announcement, Ms Sitharaman informed that, Foreign Direct Investment (FDI) limit in defence manufacturing under automatic route will be raised from 49 per cent to 74 per cent.

With an aim to boost Make in India, Finance Minister announced that a list of weapons or their parts would no longer be imported and their indigenous production will be ensured within the country. Government will notify year-wise timelines to ban such imports. In another historic structural reform FM Sitharaman announced that Corporatisation of Ordnance Factory Board to improve autonomy, accountability and efficiency among Ordnance Suppliers was done.

Finance Minister Nirmala Sitharaman announced private sector participation in coal sector through a revenue sharing mechanism. She added that this will introduce competition and transparency in the coal sector. This will also enable bidding for a coal block and selling it in the open market by private entities. Ms. Sitharaman informed that 50 blocks will be available for bidding at the earliest. A detailed roadmap for investment of Rs 50 thousand crore towards development of Infrastructure for evacuation of coal has also been outlined. Informing about a relief of 5 thousand crore to the Coal India Limited Consumers by allowing concession in the commercial terms, Ms. Sitharaman added, the sectoral reforms for mining of minerals will boost growth, employment and bring state-of-the-art technology in the field of exploration in the country.

Announcing a much awaited sectoral reform in the aviation section, Finance Minister highlighted the issue of only 60 per cent of the Indian airspace being available for commercial flights. She announced easing of restrictions on further utilisation of the air space. The decision will rope in a benefit of Rs 1000 crore for the aviation sector as it will drastically reduce the time and fuel consumed by the commercial flights.

Finance Minister added that six more airports will be put up for auction under the PPP model for their operation and management. Ms. Sitharaman announced that an additional investment of Rs 12 thousand crore is expected in the 12 airports already proposed for development by the private players. She said the government will rationalise the tax regime for Maintenance, Repair and Overhaul (MROs) of the Aircrafts in the country. Earlier, the aircrafts had to fly abroad for the MROs.

Ms. Sitharaman informed that the government will release a tariff policy with reforms, including consumer rights, promotion of industry and sustainability of sector for the power distribution companies. She also announced the proposal to privatise the power departments in Union Territories ensuring better services and efficiency in power distribution.

In another major reform, Finance Minister announced that, the government will boost private sector investments in social-infrastructure projects, like hospitals. The total outlay for this has been projected to be at Rs 8 thousand crore after an increase in the Viability Gap Share to 30 per cent in all such projects. Opening up Indian space sector, the Minister announced, boosting up of private participation in space related activities.

A major push to the decision is aimed at by allowing private sector to use ISRO facilities and other relevant assets to improve their capabilities. Future projects for planetary exploration and outer space travel has also been opened to the private sector. This will also witness liberalisation of geo-spatial data policy for providing remote-sensing data to tech-entrepreneurs, which in turn will open up wide horizon of avenues.

In a major sectoral reform for the atomic energy sector, Finance Minister announced establishment of research reactors on PPP basis for production of medical isotopes. This decision will lead to opening up of various affordable treatment facilities for cancer and other major diseases.

2020-05-17
Editor in chief
Previous: Odisha registered- 91 positive cases taking the tally to 828:One Sarpanch has tested positive
Next: Third phase of the nationwide lock down ends to day :Punjab govt extends lockdown till 31st May