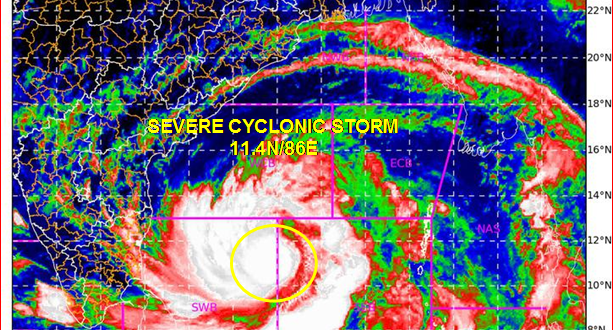 New Delhi:17/5/20: The Cyclone Warning Division of the India Meteorological Department in its latest release (at 1230 Hrs. IST) has stated as below:

Yesterday’s depression over southeast Bay of Bengal (BoB) intensified into a deep depression in the same afternoon (1430 hrs IST of 16th May), into cyclonic storm ‘AMPHAN’ (pronounced as UM-PUN)’in the same evening (1730 hrs IST of 16th May) over the central parts of south BoB. It further intensified into a severe cyclonic storm at 0830 hrs IST of today, the 17th May, 2020 and lay centred over the same region near latitude 11.4°N and longitude 86.0°E, about 990 km south of Paradip (Odisha), 1140 km south-southwest of Digha (West Bengal) and 1260 km south-southwest of Khepupara (Bangladesh).

It is very likely to intensify further into a Very Severe Cyclonic Storm during next 12 hours.It is very likely to move nearly northwards slowly during next 24 hours and then re-curve north-north-eastwards and move fast across northwest BoB and cross West Bengal – Bangladesh coasts between Sagar Islands (West Bengal) and Hatiya Islands (Bangladesh) during afternoon / evening of 20th May 2020 as a Very Severe Cyclonic Storm.

· Also, fishermen are advised not to venture into north Bay of Bengal along and off North Odisha, West Bengal and adjoining Bangladesh coasts during 18th to 20th May 2020.