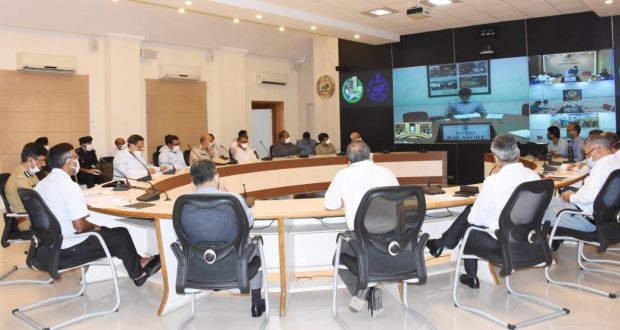 in State News May 15, 2020 Comments Off on Odisha Government has warmed up the administrative set up for the impending cyclone Amphan 412 Views

Bhubaneswar:15/5/20: Odisha Government has warmed up the administrative set up for the impending cyclone, Amphan. For the purpose, a high-level meeting was held under the Chairmanship of Chief Secretary Asit Tripathy in Lok Seva Bhawan today wherein Additional Chief Secretary & SRC Pradeep Kumar Jena outlined the issues and presented the updates for discussion.

Outlining the present position of the cyclone, ACS Pradeep Jena said, “As per notices of IMD, there is a well-marked low-pressure area over South East Bay of Bengal in the morning of which is likely to concentrate into a depression over central parts of south Bay of Bengal on 15th May and further intensify into a Cyclonic Storm over the same region by 16th evening. lt is very likely to move northwestwards initially till 17th May and then re-curve north-northeastwards towards North Bay of Bengal on 18th & 19th May. Government is in constant touch with IMD for latest updates”.

The Police, Fire, NDRF, and ODRAF teams were asked to remain in all readiness for required operations. Chief Secretary Asit Tripathy directed the Home and Police department to pre-position the teams at critical points with the necessary equipment. Government officers were directed to stay at headquarters and not avail leave.

Additional Chief Secretary Jena said, “Satellite Phones with Collectors, OORAE and others may be kept in readiness. Coastal districts should keep communication systems under EWDS such as DMR, Siren Towers are also operational”.

Health & Family Welfare Department was advised to ensure the availability of essential medicines in hospitals at different levels; and to make arrangements for mobile health teams, medical relief centres, and sanitation. The concerned departments including Fisheries & Animal Resource, Women & Child Development, and Agriculture & Farmers Empowerment department were asked to ensure all arrangements as per the SOP for cyclones. Housing & Urban Development department was advised to take the necessary steps to avoid urban flooding.

2020-05-15
Editor in chief
Previous: Odisha’s tally of coronavirus positive cases reached 672
Next: Odisha government announced promoted all students from Classes I to VIII in the academic year 2019-20