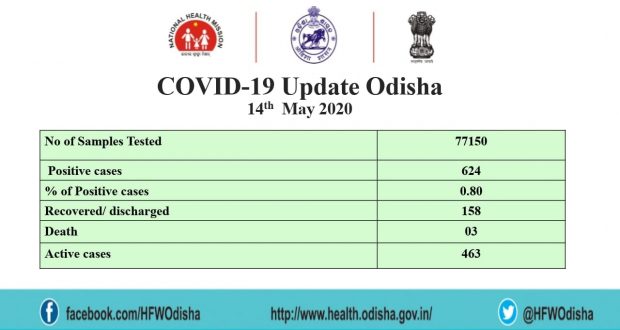 Total count of cases in COVID-19 in Odisha rose 624

Bhubaneswar:14/5/20: As many as 86 more people tested positive for COVID-19 in Odisha on Thursday, raising the total count of cases in the state to 624, a health department official said.

The number of recoveries in the state rose to 158, with 15 more patients, all from Jajpur district, defeating the deadly disease, the official said.

With this, the number of active COVID-19 cases in Odisha stands at 463. So far, three persons have died due to the respiratory disease in the state.

Of the 86 people who tested positive for COVID-19 on Thursday, 84 had been lodged in quarantine centres following their return from states like Gujarat, West Bengal and Karnataka.

A total of 4,394 samples were tested on Wednesday, taking the number of COVID-19 tests conducted in Odisha till now to 77,150, the health department official said.

With hordes of migrant workers returning home, mostly from the industrial city of Surat in Gujarat, the number of cases in different districts of Odisha has spiked over the past two weeks.

Nine cases have been reported from Mayurbhanj, five in Jagatsinghpur, and four each in Keonjhar, Puri and Boudh districts.

Three people in Cuttack have tested positive for COVID-19; two each in Kalahandi, Jharsuguda and Bolangir districts; and one each in Nayagarh, Koraput, Dhenkanal and Deogarh.

Bhubaneswar has recorded the highest number of recoveries, with 45 of the 50 patients in the state capital discharged from hospitals.

The city has three active cases, while it has recorded two COVID-19 fatalities.

Ganjam has the maximum number of active cases in the state at 249. One person has died in the district due to COVID-19.

The recovery numbers in Odisha touched 158 on Thursday after the State Health and Family Welfare Department informed that 15 more patients have been discharged from hospital in the State. All the recovery cases reported were from Jajpur district.

On the other hand, the State Health Department has now decided to rope in private players to conduct testing at a faster rate. Health Minister Naba Das on Thursday informed that since ICMR has already given a green signal to begin testing at private laboratories, the government is going to begin testing at Bolangir, Koraput & Baripada on May 16, May 23 & May 31, respectively.

2020-05-14
Editor in chief
Previous: Odisha CM announces Rs 50L assistance to kin of sarpanches in case of their death during COVID management
Next: 1,00,030 Odias have returned to Odisha by train/bus and other vehicles