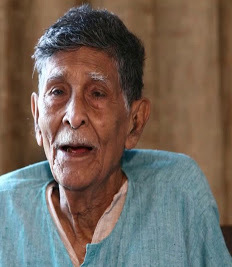 Bhubaneswar:14/5/20: Eminent freedom fighter and Padma  Bhabani Charan Pattanayak passed away at Capital Hospital in Bhubaneswar today. He was 98.

Patnaik was suffering from prolonged age-related illness and cardiac issues. He was shifted to the ICU of the city hospital on March 25. Expressing concern, Chief Minister Naveen Patnaik had directed the health department to form a medical team to monitor the veteran freedom fighter’s health condition.

Born on May 11, 1922, at Andhia village in Puri district, Bhabani Charan Pattanayak was elected to the Upper House from Odisha for three terms in 1961, 1966 and 1978. In 2018, he was conferred the Padma Shri. He was also one of the founder members of Nimapara Autonomous College.

A true Gandhian, Patnaik had joined the Quit India Movement in 1942. At that time, he was studying in Class XI. He had also spent three-and-a-half years in jail.

2020-05-14
Editor in chief
Previous: Testing of swab samples for COVID-19 up to 15, 000 on a daily basis in Odisha
Next: Odisha CM announces Rs 50L assistance to kin of sarpanches in case of their death during COVID management