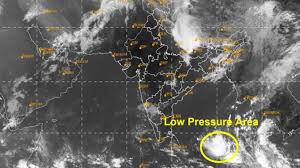 Low pressure not to intensify into cyclone over Odisha

in National, State News May 13, 2020 Comments Off on Low pressure not to intensify into cyclone over Odisha 396 Views

Bhubaneswar: 13/5/20:The regional office of IMD clarified that the developing low pressure over southeast Bay of Bengal and adjoining south Andaman Sea will pose no threat to Odisha.

The regional office said there is no weather warning for Odisha in association with this low pressure system for next five days.

The fishermen are advised not to venture into deep sea area of south and central Bay of Bengal from May 15.

Under the influence of the system, squally winds, speed reaching 45-55 kmph gusting to 65 kmph is likely to prevail over south and adjoining central Bay of Bengal on May 15 and 55-65 kmph gusting to 75 kmph over the same region on May 16.

The regional office of IMD said wind speed is likely to increase further becoming gale force winds speed reaching 65-75 kmph gusting to 85 kmph over southwest and adjoining west central Bay of Bengal from the evening of May 16.

The IMD said it is very likely to move northwestwards initially till May 17 and then re-curve north-northeastwards. In association with the above system, the conditions will become favourable for advance of southwest monsoon over south Bay of Bengal, Andaman Sea and Andaman & Nicobar Islands around  May 16.

2020-05-13
Editor in chief
Previous: Presentation made by Union Finance & Corporate Affairs Minister Smt. Nirmala Sitharaman under Aatmanirbhar Bharat Abhiyaan
Next: As on 13th May 2020, a total of 642 “Shramik Special” trains have been operationalized from various states