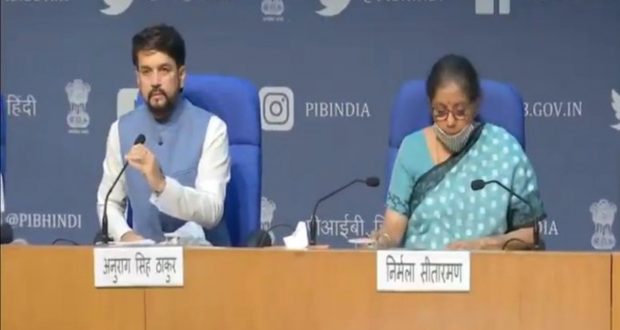 Addressing media in New Delhi, Finance Minister Nirmala Sitharaman gave details regarding these financial packages equaling to 10 percent of the national GDP and amounting to 20 lakh crore rupees. She said the financial stimulus will cater to various sections of the society including MSMEs, labourers, middle class and Industries.

Ms. Sitharaman announced 15 special financial packages of 6 lakh 40 thousand crore rupees benefitting a wide array of sectors including MSMEs, Discoms, Real Estate, Middle Class, Tax Payers and others. In a historical decision, the ambit of Micro, Small and Medium Enterprises (MSMEs) have been widened resulting in inclusion of many small and micro industries under this sector. This decision of changing the definition of MSMEs will increase competition and productivity in the sector.

In a major boost to the MSME sector, a collateral-free loan of 3 lakh crore rupees has been announced with a moratorium of 12 months. These loans will benefit 45 lakh small and medium units. Another package of 20 thousand crore rupees for stressed MSMEs benefitting 2 lakh units have also been announced.

Finance Minister informed that 50 thousand crore rupees will be infused in the MSMEs through the equity channel. Opening up avenues for indigenous companies, Ms. Sitharaman said that tenders for Government procurement up to 200 crore rupees will no longer be through Global Tender route. e-Market linkage for MSMEs has been announced to ensure wider reach for sale of products from the small and medium industries. Government bodies and PSUs have been directed to clear all pending dues of MSMEs within next 45
days.