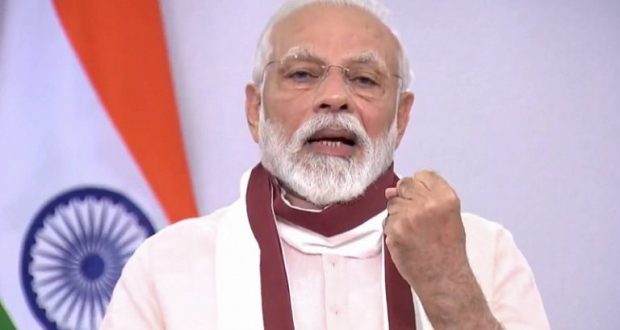 in National May 12, 2020 Comments Off on Prime Minister Narendra Modi announced a special economic package worth over 20 lakh crore rupees 441 Views

Newdelhi:12/5/20: Prime Minister Narendra Modi announced a special economic package worth over 20 lakh crore rupees and 10% of India’s GDP in view of the coronavirus pandemic. He said the package would provide relief to almost every segment of the population. He added that the details of the package would be announced in the next few days by the Finance Minister

Addressing the nation today, he said that building a Self Reliant India was essential in a post-COVID-19 world. He highlighted that India’s self-reliance would be based on 5 pillars – Economy, Infrastructure, System, Demography and Demand.

The Prime Minister emphasised that self-reliance was essential for India’s global competitiveness. He said that reforms over the past 6 years have to be taken forward to build a self-reliant India.

He further said that the corona outbreak had shown us the importance of local markets and local supply chains. He said that we needed to adopt the mantra of “local” and work towards its progress.

Prime Minister Modi highlighted the gravity of the pandemic which has infected more than 42 lakh people across the world and has led to the death of over 3 lakh people globally.

The Prime Minister said that the whole world is engaged in a fight for life against the virus. He said that while the crisis is unlike anything seen before, humanity must not lose faith and determination. The Prime Minister added that the 21st century is said to be the Indian century. He said that India bears a responsibility. Recalling the Shastras, he highlighted the importance of self-reliance.

He added that India had converted a disaster into an opportunity. He said that when the pandemic erupted, PPE kits and N-95 masks were not made in India. Prime Minister Modi said that the meaning of self-reliance has changed. The world is now looking towards humanity centric globalization. In this respect, the Prime Minister expressed confidence that India could lead the way. He praised India’s ancient culture saying that the wisdom of age-old principles such as Vasudaiva Kutumbakam and harmony with nature ensure that world progress is central to India’s conception of progress.

He also said India’s initiatives such as the International Solar Alliance were a gift to the world. Our centuries-old conception of self-reliance has always followed the path of global progress.

Citing the recovery of the Kutch in Gujarat after the 2002 earthquake, he said that the region was laid waste, but, recovered soon. He said this was a symbol of the commitment and resolve of Indians.