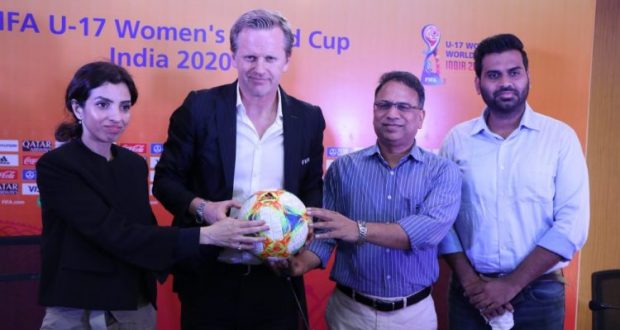 New Delhi/Bhubaneswar:12/5/20: FIFA U-17 Women’s World Cup will be held from February 17 till March 7, 2021, All India Football Federation (AIFF) and the Local Organising Committee (LOC) confirmed on Tuesday.

Kalinga Stadium in Bhubaneswar is among the five venues, the others being Navi Mumbai, Guwahati, Ahmedabad and Kolkata, where the tournament will be played. It was earlier scheduled for November 2-21 but had to be postponed due to the COVID-19 pandemic.

Following the announcement, Sports Minister, Tusharkanti Behera said, “I welcome the decision of FIFA, AIFF and LOC. The Odisha Government remains committed to preparing for the tournament and hosting the same as per FIFA standards. With the new dates now in place, we will be able to expedite preparations once the nationwide lockdown is eased, and be ready in time to host the prestigious tournament.”

The LOC, in a statement had earlier, said that he dates were confirmed after taking into account the time needed to complete the UEFA, CONCACAF, CAF, OFC, and CONMEBOL qualification tournaments as well as the best possible conditions in the country to host a successful FIFA U-17 Women’s World Cup.

“We are now looking ahead and hoping to host a wonderful tournament that will give women’s football in India, the perfect platform to grow and develop. All the host cities have put in a lot of effort and commitment so far, and we are happy that the new dates will allow them to make up for the lost time and provide momentum going forward, it added.

2020-05-12
Editor in chief
Previous: Odisha Government has decided to introduce a certificate course on COVID-19 management
Next: Bapuji Nagar area in Bhubaneswar were sealed for violating COVID-19 social distancing norms