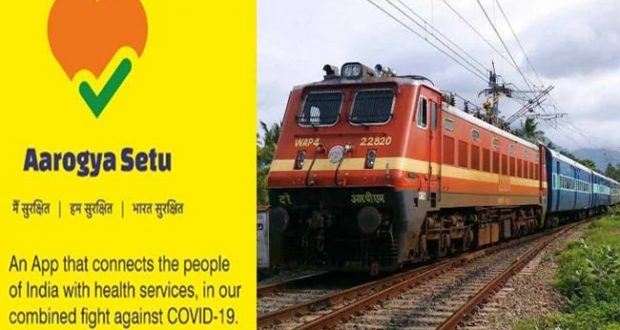 in National May 12, 2020 Comments Off on Aarogya Setu Mandatory For Passengers Of Special AC Trains 417 Views

New Delhi:12/5/20: Even as the 15 pairs of special trains would be operated on select routes from Tuesday nearly two months after all regular passenger services were suspended by the Indian Railways amid the Covid-19 outbreak, the national transporter has made it “mandatory” for passengers to download the Aarogya Setu app.

A senior railway ministry official told IANS, “Aarogya Setu application is mandatory for all passengers traveling by the Special AC trains.” He said it has been made mandatory by the Union Ministry of Home Affairs (MHA) and the Indian Railways shared the link of downloading the mobile application on its Twitter handle on Monday night.

The railways has asked the passengers to arrive at the railway station 90 minutes prior to the departure of the train. Thermal screening of passengers will be done before they will be allowed to enter the station premises.