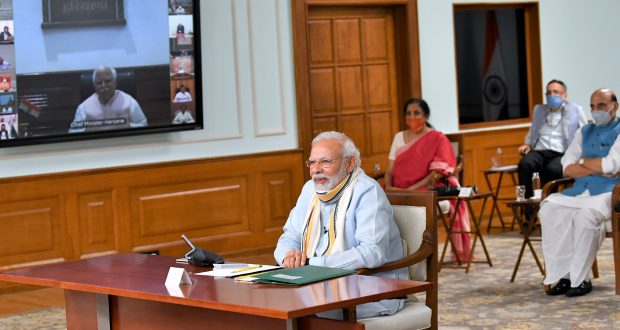 The Prime Minister, Shri Narendra Modi holds 5th meeting with the State Chief Ministers via video conferencing on COVID-19 situation, in New Delhi on May 11, 2020.

in National May 11, 2020 Comments Off on PM Narendra Modi has stressed the need to have more focused approach now to fight against COVID-19 374 Views

Newdelhi:11/5/20: Prime Minister Narendra Modi has stressed the need to have more focused approach now to fight against COVID-19. He said, the road ahead should be focused on reducing the spread and ensuring that all precautions are taken by people including social distancing norms.

In a meeting through video conferencing, with State Chief Ministers, Mr Modi said, the governments have to ensure that rural India remains free from this crisis. Official sources said, the Prime Minister added that slowly but surely, economic activities have begun to pick up in several parts of the country and in the coming days, this process will further gather steam. He also said, there is global recognition for India’s success in handling the COVID-19 pandemic and the Central Government appreciates the efforts made by all states in this regard. Mr Modi said, now there is reasonably clear indication as to the geographical spread of the pandemic in India, including the worst affected areas.

He added that over the past few weeks, officials have understood operating procedures in a time such as this, right up to the district level. Defence Minister Rajnath Singh, Home Minister Amit Shah, Finance Minister Nirmala Sitharaman and Health Minister Harsh Vardhan  among others were present on the occasion.

This was Prime Minister’s fifth video conference with the Chief Ministers since the announcement of nationwide lockdown in March this year. As the country enters into the last week of its third phase of lockdown, Mr. Modi’s meeting with the State Chief Ministers was considered to be very crucial in terms of finalizing the roadmap ahead.

2020-05-11
Editor in chief
Previous: Passenger services on Indian Railways shall be partially restored w.e.f. from 12th May 2020
Next: Ministry of Home Affairs issues standard operating procedure for movement of people by trains