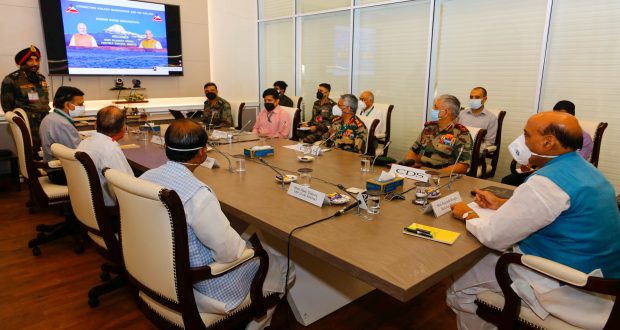 The Union Minister for Defence, Shri Rajnath Singh inaugurates the 80 kilometre long crucial road from Ghatiabgarh to Lipulekh, vastly reducing travel time to Kailash-Manasarovar yatra through video-conferencing, in New Delhi on May 08, 2020.

Speaking on the occasion, Raksha Mantri said the Central Government and Prime Minister Shri Narendra Modi have a special vision for the development of remote areas.

Shri Rajnath Singh said with the completion of this crucial road link, the decades-old dreams and aspirations of local people and pilgrims have been fulfilled. He expressed confidence that local trade and economic growth in the region would receive a boost with the operationalisation of this roadway.

Recalling that pilgrimage to Kailash-Manasarovar has been sacred and revered by Hindus, Buddhists and Jains, Shri Rajnath Singh said with the completion of this road link, the yatra could be completed in one week compared to 2-3 weeks it took earlier. The road originates from Ghatiabagarh and terminates at Lipulekh Pass, the gateway to Kailash-Mansarovar. In this 80 kilometer road, the altitude rises from 6,000 to 17,060 feet. With the completion of this project, the arduous trek through treacherous high-altitude terrain can now be avoided by the pilgrims of Kailash-Mansarovar Yatra. At present, the travel to Kailash-Mansarovar takes around two to three weeks through Sikkim or Nepal routes. Lipulekh route had a trek of 90 Km through high altitude terrain and the elderly yartris faced lot of difficulties.

While congratulating the Border Roads Organisation (BRO) engineers and personnel whose dedication made this achievement possible, Raksha Mantri mourned the loss of lives during the construction of this road. He praised the contribution of BRO personnel who live in far off places, and away from their families, that too in difficult times of COVID-19.

2020-05-08
Editor in chief
Previous: Odisha Government has increased the mandatory quarantine period for returnees from 14 days to 21 days
Next: Flight carrying over 230 Indians from Singapore lands in Delhi under Vande Bharat Mission