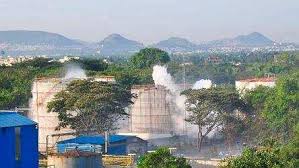 New Delhi:8/5/20: Centre has offered all help to Andhra Pradesh to tackle the situation arising out of Vishakhapatnam gas leak. Prime Minister Narendra Modi and Home Minister Amit Shah spoke to Andhra Pradesh Chief Minister YS Jaganmohan Reddy yesterday and assured him of all required aid and assistance from the Centre.

Prime Minister chaired a high-level meeting yesterday to take stock of the situation and steps being taken in response to the gas leak incident. Mr Modi discussed measures being taken for the safety of the affected people. Prime Minister also spoke to the officials of Union Home Ministry and the National Disaster Management Authority (NDMA). The meeting was attended by Home Minister Amit Shah and Defence Minister Rajnath Singh among others.

The death toll in Visakhapatnam gas leak has risen to 11. The styrene gas had leaked during wee hours yesterday from a Polymers Plant at RR Venkatapuram village near Visakhapatnam and quickly spread to villages in a five-kilometre radius. Hundreds of villagers, most of them children, suffered from irritation in their eyes, breathlessness, nausea and rashes.

246 people with health complications are undergoing treatment at  King George Hospital. About 800 people in RR Venkatapuram village in Gopalapatnam, were evacuated and most needed only first aid.

Cabinet Secretary Rajiv Gauba also reviewed the situation with the Secretaries of the Ministries of Home Affairs, Environment, Chemicals and Petrochemicals, Pharmaceuticals, Information and Broadcasting, Members of the National Disaster Management Authority and Director-General, National Disaster Response Force and others.

Andhra Pradesh Chief Minister has ordered a probe into the matter. State Industries Minister Mekapati Goutham Reddy said the LG Polymers unit was supposed to reopen post-lockdown on Thursday. He said the state government is airlifting 500 kg of inhibitors from Gujarat to neutralise the chemicals.