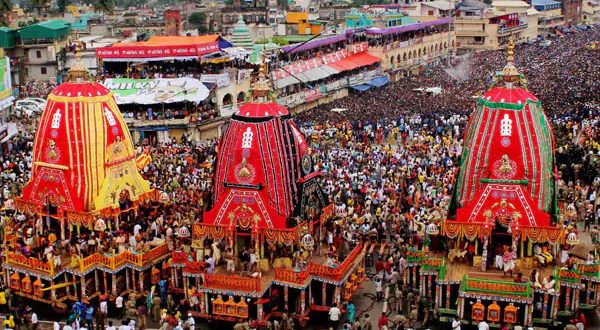 in State News May 6, 2020 Comments Off on Odisha government sought Centre’s permission to commence construction work of chariots for Rath Yatra 432 Views

Earlier, the Srimandir Management Committee had sought State govt’s permission over the matter.

The Rath Yatra, scheduled on June 23, is the most important festival in Odisha attended by over millions of devotees who throng Puri town for the 10-day long festival. The temple doors have been shut since March 20 due to the pandemic. Only day-to-day rituals are being done by the temple priests.

The temple managing committee, which met on Monday via videoconferencing, decided that if the lockdown is further extended and Rath Yatra cancelled, the logs of the chariots can be taken apart and used in the temple kitchen for preparation of the Mahaprasad.

If the car festival is not held this year, it would be the first time in the last 284 years when it could not be held. In the 425 years of the car festival, the event has been scrapped 32 times, mostly during invasion.

It was scrapped for the first time in 1568 when Kala Pahad alias Kala Chand Roy, a general of Bengal king Suleiman Kirrani attacked the temple and pillaged the deities.

2020-05-06
Editor in chief
Previous: Plus-III final semester examinations will be conducted from July 24 across Odisha.
Next: Around 39 crore poor people received financial assistance of Rs 34,800 crore under the PMGKP