Top Headlines
Home » National » J&K: 3 Photographers have been honored with the 2020 Pulitzer Prize 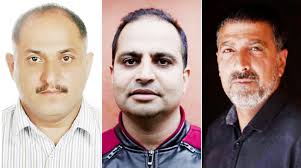 J&K: 3 Photographers have been honored with the 2020 Pulitzer Prize

New Delhi:6/5/20: Dar Yasin, Mukhtar Khan and Channi Anand have been honored with the 2020 Pulitzer Prize in feature photography for documenting the fallout of the India government’s dismantling of Jammu and Kashmir’s constitutional autonomy last August.

They all work with the Associated Press news agency. While Yasin and Mukhtar are based in Srinagar, Channi Anand works out of Jammu.

“This honor continues AP’s great tradition of award-winning photography,” AP President and CEO Gary Pruitt was quoted as saying by the news agency. “Thanks to the team inside Kashmir, the world was able to witness a dramatic escalation of the long struggle over the region’s independence. Their work was important and superb.”

After Kashmir was put under a complete lockdown and communications blackout on the eve of the abrogation of Article 370 in early August 2019, Yasin and Mukhtar, like many other journalists in the valley, would persuade people flying out of the Srinagar airport to carry memory cards and flash drives containing their work to Delhi, where their offices would collect it.

Yasin told the agency that their work has both professional and personal meaning. “It’s not the story of the people I am shooting, only, but it’s my story,” he said. “It’s a great honor to be in the list of Pulitzer winners and to share my story with the world.”