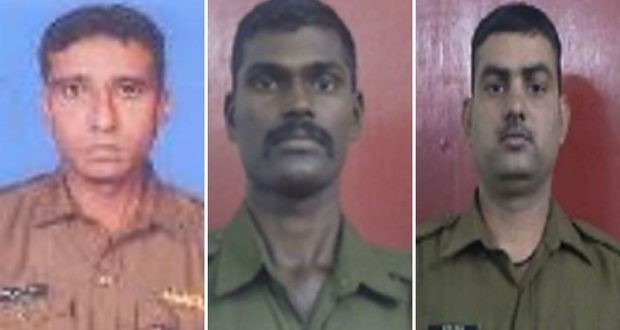 Jammu and Kashmir’s Handwara reported a second terror attack:Three CRPF Jawans, and a civilian were killed

in National May 5, 2020 Comments Off on Jammu and Kashmir’s Handwara reported a second terror attack:Three CRPF Jawans, and a civilian were killed 455 Views

Handwara:5/5/20: Jammu and Kashmir’s Handwara town on Monday reported a second terror attack in the last 48 hours. Three CRPF Jawans, and a civilian were killed in the attack.

The jawans have been identified as – Ashwani Kumar from UP, and C Chandrasekar and Santosh Kumar from Aurangabad in Bihar, all of them were constables of 92 Battalion.

While a terrorist who attacked the CRPF patrol party near Qaziabad area was reportedly neutralized, the security officials also found the body of a 14-year-old boy who was killed in the cross-firing, CRPF officials told the media.

On Sunday (May 3), four Indian Army personnel, including a Commanding Officer of 21 Rashtriya Rifles unit, a Major, two soldiers and one J-K policeman were killed in a terror attack at Handwara. The forces also killed two terrorists in retaliation.

2020-05-05
Editor in chief
Previous: India PM emphasised on coordinated approach to fight against COVID-19
Next: Odisha Government said that no decision has been taken regarding opening of outlets selling alcohol