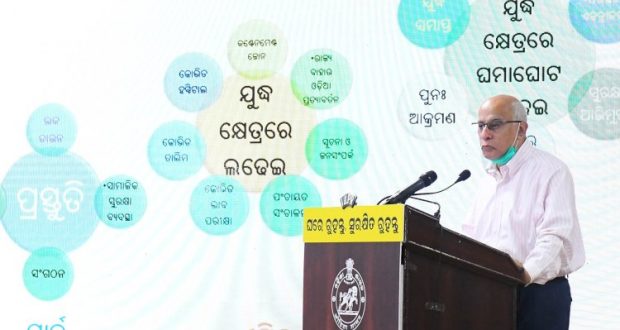 in State News May 2, 2020 Comments Off on Odisha’s model to combat the dreaded Coronavirus is based on humanitarianism 543 Views

Bhubaneswar:2/5/20: Chief Spokesperson on COVID-19, Subroto Bagchi said Odisha’s model to combat the dreaded Coronavirus is based on humanitarianism. He said the state is at the bottom of the ladder among the affected states.

Bagchi said of 36,593 samples tested in the state so far, 153 have tested positive (positivity rate is 0.4 percent, the lowest among the affected states). The chief spokesperson said only one death was reported in the state.

Bagchi said the state is in the preparatory stage and the second one is the preliminary war. The last two stages, intense fight, and end of the war are still to come.

Given our dedication, we are hopeful to win the war against corona, he said and added that chief minister Naveen Patnaik is at the forefront of the decisive war.

The chief minister has directed to work with greater vision and effect. He said Odisha has successfully established 35 exclusive COVID-19 hospitals and 7291 temporary medical centers with 1.82 lakh beds in all the 6,798 Gram Panchayats. Bagchi said the testing capacity of the state has been increased.

The chief spokesperson said the poorest of the poor in the state were given ration for the next three months to ensure food security. This will encourage them to fight coronavirus, he added.

2020-05-02
Editor in chief
Previous: Clarification regarding Movement of Persons and Vehicles in Orange Zones
Next: Katikata in Jajpur district has become a COVID-19 hotspot in Odisha