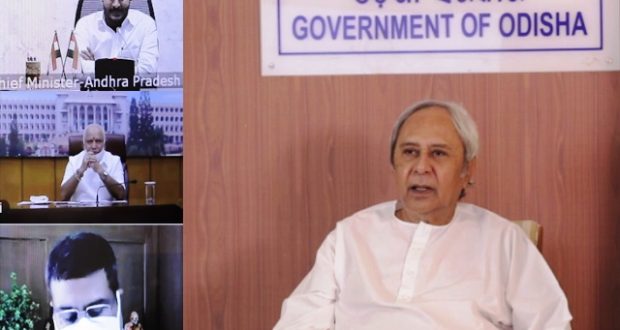 Bhubaneswar:2/5/20: Odisha Chief Minister Naveen Patnaik has discussed with Chief Ministers of Karnataka and Andhra Pradesh for the safe return of Odias stranded in those states.

Union Minister Petroleum and Steel Dharmendra Pradhan also joined the three chief ministers and urged the chief minister of southern states to ensure that the migrant workers wishing to come to Odisha must register their names with the portal set up by Odisha government.

Patnaik extended his heartfelt thanks to both the Chief Ministers for taking care of workers during the lockdown period and sought their cooperation for the safe return of stranded Odias.

The chief minister of Karnataka and Andhra Pradesh said their governments have already initiated a number of measures to provide work for people and added that those who wish, can stay in their states and continue their work as usual.

The video conferencing was attended by the Chief Advisor of CMO R Balkrishan, Chief Secretary Asit Tripathy, and other senior officials.

2020-05-02
Editor in chief
Previous: Katikata in Jajpur district has become a COVID-19 hotspot in Odisha
Next: Odisha COVID-19 tally increased to 157