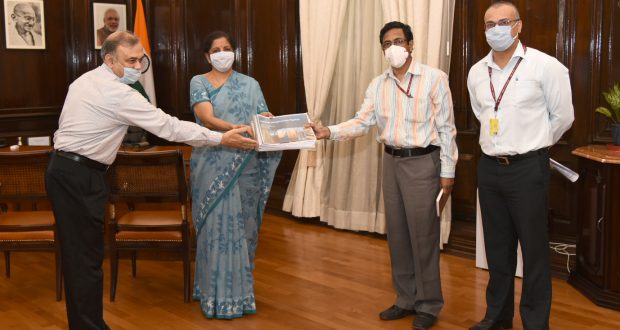 The Task Force on NIP submitting its Final Report on the National Infrastructure Pipeline (NIP) for FY 2019-25 to the Union Minister for Finance and Corporate Affairs, Smt. Nirmala Sitharaman, in New Delhi on April 29, 2020.

Union Finance Minister Smt. Nirmala Sitharaman in her Budget speech 2019-20 announced that Rs. 100 lakh crore would be invested on infrastructure over the next five years. The Prime Minister, Shri Narendra Modi, in his Independence Day speech 2019 reiterated that “For development of modern infrastructure, an amount of Rs. 100 lakh crore has been earmarked for this period which will create new job opportunities besides improving the living standards.”

NIP is a first-of-its-kind, whole-of-government exercise to provide world-class infrastructure across the country, and improve the quality of life for all citizens. It aims to improve project preparation, attract investments (both domestic and foreign) into infrastructure, and will be crucial for target of becoming a $5 trillion economy by FY 2025.

The NIP has been made on a best effort basis by aggregating the information provided by various stakeholders including line ministries, departments, state governments and private sector across infrastructure sub-sectors identified in the Harmonised Master List of Infrastructure. To draw up the NIP, a bottom-up approach was adopted wherein all projects (Greenfield or Brownfield, Under Implementation or under conceptualisation) costing greater than Rs 100 crore per project were sought to be captured.

The final report identifies and highlights recent infrastructure trends in India as well as global in all sectors of infrastructure. It also captures sector progress, deficits and challenges. In addition to update existing sectoral policies, the Final Report also identifies and highlights a set of reforms to scale up and propel infrastructure investments in various sectors throughout the country. The report also has suggested ways and means of financing the NIP through deepening Corporate Bond markets, including those of Municipal Bonds, setting up Development Financial Institutions for infrastructure sector, accelerating Monetisation of Infrastructure Assets, Land monetisation, etc.

2020-04-29
Editor in chief
Previous: UGC Guidelines on Examinations and Academic Calendar for the Universities in View of COVID-19
Next: Union Minister holds a video conference meeting with former Army Generals and Air Marshals on COVID situation