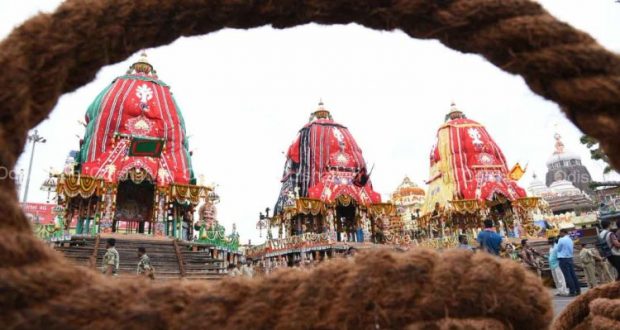 Daitapati Nijog, has written to the state government for conducting a low-key Rath Yatra of Lord Jagannath

Puri: 29/4/20The servitors’ body, Daitapati Nijog, has written to the state government for conducting a low-key Rath Yatra of Lord Jagannath this year. It urged the Chief Minister to facilitate the conduct of Rath Yatra which they say is being celebrated for centuries.

The letter said many natural disasters have struck the state in the past including the 1918 Bombay flu that claimed millions of lives. But, the Puri Rath Yatra was not interrupted, the letter added.

Durga Das Mohapatra, a senior Servitor, said the state is hit by the dreaded coronavirus this year, but despite this crisis, we urge CM to conduct Rath Yatra in a low-key.

The servitors’ body stated that the world-famous Rath Yatra was organised even during sepoy mutiny and the famine of 1866.

Mohapatra said the vantage points in Puri can be sealed and people will watch Rath Yatra live on television at their homes.

Another senior servitor Ganesh Das Mohapatra also aired a similar view saying much such crisis had occurred, but Rath Yatra was conducted without any interruption.

We have put forth our suggestions and appealed to the government to consider them and ensure that the festival is conducted this year, he said.

The reaction of servitors’ body comes a day after the Mukti Mandap, the highest body of Hindu religious scholars in Puri Srimandir, opined that it is ok if Rath Yatra could not be held due to coronavirus pandemic.

2020-04-29
Editor in chief
Previous: People of the Odisha must be on their guard as asymptomatic corona cases are on the rise
Next: Remaining papers of annual +2 examinations will be held after lockdown