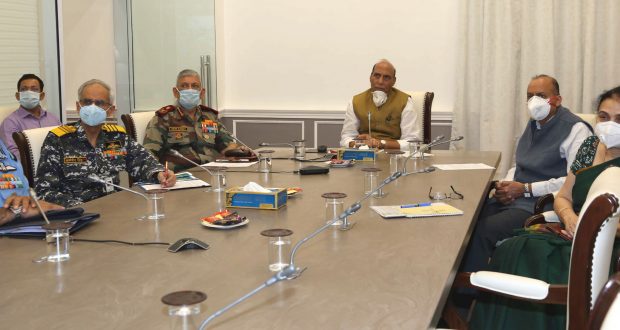 Newdelhi:24/4/20:Raksha Mantri Shri Rajnath Singh today reviewed the operational preparedness as well as measures to fight COVID-19 with all the Commanders in Chief through a video conference.

Raksha Mantri in his address appreciated the role of the Armed Forces for the assistance extended to the local civilian administration and preparatory measures taken to fight COVID-19.

Shri Rajnath Singh expected the Forces to ensure their operational preparedness, while they are battling COVID-19 and the adversary should not be allowed to exploit the current situation.

He also directed the Forces to initiate measures to spend the financial resources, avoiding wastage in view of the economic burden imposed by COVID-19.

Stressing on the requirement of jointness of the Armed Forces,  Raksha Mantri asked the Commanders in Chief to identify and prioritise tasks that could be accomplished  quickly and assist in revival of the economy after the lockdown is lifted.

During the conference the Commanders in Chief apprised the Raksha Mantri of various measures put in place by them to prevent virus infection among the Forces and assistance extended to the local civilian administration. These include issue of Standard Operating Procedures on COVID-19, introduction of appropriate modifications in protocols and drills as per the advisories issued by Ministry of Health & Family Welfare and other agencies and taking care of the Ex-Servicemen and their families residing in their respective command areas.

The Commanders appreciated recent devolution of emergency financial powers by the Ministry of Defence that has ensured timely procurement of necessary medical supplies, to bolster the health infrastructure of the hospitals.

The Armed Forces have in a holistic manner taken upon themselves the responsibility of improving the support in dealing with COVID-19, by augmenting additional manpower, by providing them basic training, to deal with the epidemic.