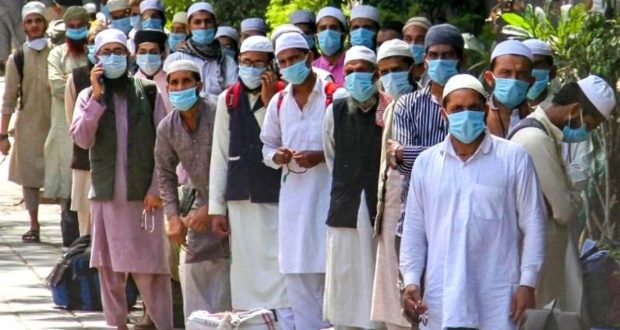 Central government survey indicates Nearly 29.8 per cent of the country’s total Covid-19 cases are linked to the Markaz cluster incident

in National April 18, 2020 Comments Off on Central government survey indicates Nearly 29.8 per cent of the country’s total Covid-19 cases are linked to the Markaz cluster incident 412 Views

New Delhi, April 18: The central government on Saturday said of the 14,378 COVID-19 cases in India, more than 4,000 are linked to the March congregation of Tablighi Jamaat in New Delhi.

“Nearly 29.8 percent of the country’s total COVID-19 cases are linked to the Markaz cluster incident. The attendees to the congregation have affected people in a total of 23 states and union territories,” Lav Aggarwal, joint secretary, Ministry of Health and Family Welfare, said at a press briefing.

The government also said Tamil Nadu, Telangana, Uttar Pradesh, and Andhra Pradesh were most affected due to the congregation.

Of the total cases in Tamil Nadu, 84 percent are linked to the Tablighi Jamaat event, making it the most affected state.

Telangana has 79 percent cases linked to the event, followed by Delhi at 63 percent, Andhra Pradesh (61 percent) and Uttar Pradesh (59 percent).