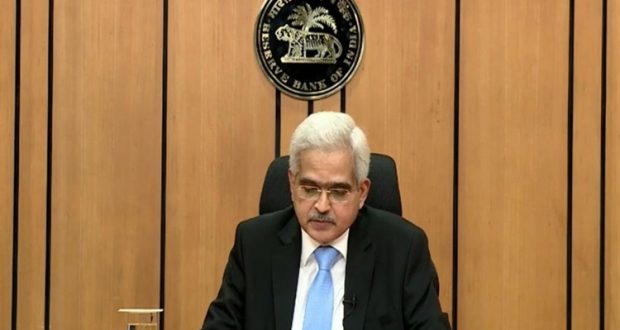 RBI Governor announced to slash the reverse repo rate from 4 percent to 3.75 percent

in National April 17, 2020 Comments Off on RBI Governor announced to slash the reverse repo rate from 4 percent to 3.75 percent 337 Views

Newdelhi:17/4/20Amidst the steep fall in the rupee and the continuing volatility in other segments of the financial market, Reserve Bank of India today announced several regulatory measures. While addressing media, RBI Governor Shaktikanta Das announced to slash the reverse repo rate from 4 percent to 3.75 percent while keeping the repo rate unchanged. He also announced 50,000 crore rupees booster package for small and medium-sized industries to recover from the lockdown.

The RBI Governor declared that the period of resolution plan for NPAs will be extended by 90 days and the loans given by NBFCs to real estate companies will get similar benefits as given by the scheduled commercial banks. He said that these measures will help to maintain liquidity in the system, facilitate and incentivize bank credit flows, ease financial stress and enable formal working of markets.

Mr. Das also said that India’s growth rate is expected to be highest among G20 nations, as per IMF estimates. The Governor mentioned that pre-monsoon Kharif sowing has been aggressive and the IMD has forecasted a normal southwest monsoon.

Prime Minister Narendra Modi today said that the announcements made by Reserve Bank of India will greatly enhance liquidity and improve credit supply. In a tweet, Mr. Modi said, these steps would help our small businesses, MSMEs, farmers and the poor and it will also help all states by increasing wages and means advance limits.

Finance Minister Nirmala Sitharaman has said that the Reserve Bank of India has taken a slew of steps in view of the difficulties being faced due to COVID-19. In a series of tweets, the Minister said, these steps aimed at maintaining adequate liquidity in the system, incentivising bank credit flows, easing financial stress and enabling the normal functioning of markets. She said RBI has increased the ways and means advance limit for states to 60 percent over and above the level as on 31st of March to help state governments tide over cash flow problems due to a temporary dip in revenue collections.

The Minister said, it has now been decided that the Non-Performing Asset, NPA classification norms will exclude the three-month moratorium window that banks are allowed to give on loan repayments to ease the worries of MSMEs that are in danger of becoming NPA accounts.

2020-04-17
Editor in chief
Previous: Odisha government has prepared a new strategy for battle against the deadly COVID-19 virus
Next: Rs 5,000 financial assistance to servitors of Puri Srimandir in view of the lockdown.