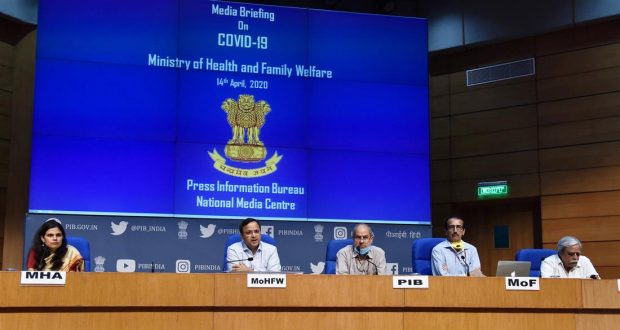 in National April 15, 2020 Comments Off on Centre notified a new set of guidelines in light of the extension of the nationwide lockdown till 3rd of May 409 Views

Newdelhi:15/4/20:The Centre today notified a new set of guidelines in light of the extension of the nationwide lockdown till 3rd of May. In order to mitigate the hardship for the public and relax provisions for the daily wage workers and farmers, select additional activities have been allowed which will come into effect from 20th of April in the areas which are not declared as Containment Zones.

Government has stated that all agricultural and horticultural activities including farming operations and farm workers in field, agencies engaged in procurement of agriculture products, including MSP operations, Mandis’ operated by the Agriculture Produce Market Committee, Shops of agriculture machinery will remain fully functional during this time. Movement of all trucks and other goods carrier vehicles with two drivers and one helper subject to the driver carrying a valid driving license to remain functional. Government has emphasized that even empty trucks and other such transport carriers should be allowed to ply.

In addition, all finance related institutions and health related services will remain fully functional. Government has stated that all facilities in the supply chain of essential goods, whether involved in manufacturing, wholesale or retail of such goods through local stores, large brick and mortar stores or e-Commerce companies should be allowed to operate. In a major relaxation, services provided by self-employed persons like electrician, IT repairs, plumbers, motor mechanics and carpenters will also be allowed to operate in all such areas which are not demarcated as Containment Zones.

The guidelines also stated that work at construction projects where workers are available on site and no workers are required to be brought in from outside to begin in such municipalities or municipal corporations. Private vehicles for emergency services, including medical and veterinary care, and for procuring essential commodities would also be allowed.  All personnel travelling to place of work and back in the exempted categories as per the instructions of the State and local authority to be allowed as well.

MGNREGA works would be allowed with strict implementation of social distancing norms and face mask. Operations of Oil and Gas sector, including refining, transportation, distribution, storage and retailing of products like petrol, diesel, kerosene, CNG, LPG, PNG is also to be allowed. Generation, transmission and distribution of power at Central and State/UT levels to remain functional. Operations of Seaports and Inland Container Depots for cargo transport, including authorized custom clearing and forwarding agents will function as well. Print and electronic media including broadcasting, DTH and cable services to remain functional. IT and IT enabled Services have been allowed to resume functioning with up to 50 percent strength.

E-commerce companies and vehicles used by e-commerce operators will be allowed to ply after procuring necessary permissions. Centre has stated that Cold storage and warehousing services, including at ports, airports, Railway Stations Container Depots, individual units and other links in the logistics chain will remain functional. The guidelines also mention that all Private security services and facilities management services for maintenance and upkeep of office and residential complexes shall be allowed to operate.

Hotels, homestays, lodges and motels, which are accommodating tourists and persons stranded due to lockdown, medical and emergency staff, air and sea crew shall remain in operation. Industries operating in rural areas and outside the limits of municipal corporations and municipalities and manufacturing and other industrial establishments with access control in Special Economic Zones and Export Oriented Units, industrial estates and industrial townships are also allowed to function as per the new set of guidelines. However, it states that these establishments should ensure arrangements for stay of workers within their premises as far as possible and practice of social distancing should be followed.

Manufacturing units of essential goods, including drugs, pharmaceuticals medical devices, their raw material and intermediates and food processing industries in rural areas to remain functional as well. Construction of roads, irrigation projects, buildings and all kinds of industrial projects, including MSMEs, in rural areas, outside the limits of municipal corporations and municipalities and all kinds of projects in industrial estates to resume functioning after the 20th of April. Postal services, including Post Offices, operations of Railways for transportation of goods and operation of airports for cargo movement, relief and evacuation measures are to remain functional.

Government has also stated that all offices of the Government of India, it’s Autonomous and Subordinate offices will remain open and Police, Home Guards, Civil Defence, Fire and Emergency Services, Disaster Management, Prisons and Municipal Services will functional without any restrictions.  All other Departments of State and UT Governments shall work with restricted staff. All industrial and commercial establishments, work places, offices are directed to put in place arrangements for implementation of strict operating procedures following the containment procedures. Centre has also stated that strict penal action will be taken against any person violating the lockdown measures and asked everyone to adhere to all the protocols issued by the government.

2020-04-15
Editor in chief
Previous: JSPL Bags export order to Supply 12000 tonnes of Rail blooms to France
Next: Odisha 5T Secretary and Development Commissioner visited the districts of Kalahandi and Sambalpur