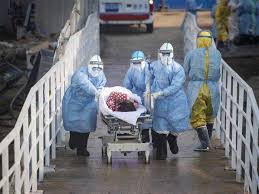 Jajpur: 14/4/20: The number of COVID-19 positive cases in Odisha’s Jajpur district rose to two after another person tested positive for the virus in the late hours yesterday. With this, the total cases in the state mounted to 56 , informed the Health and Family Welfare Department today.

As per information, the fresh case is a 66-year-old man of Sana Trilochanpur  village under Jafarpur Gram Panchayat in the district and has recent travel history to Kolkata. He was under home quarantine and has been admitted to Ashwini Hospital in Cuttack. Following detection of the new case, the district administration has declared three villages, including  Sana Trilochanpur and Saipur as containment zone, informed Collector Ranjan Kumar Das

It is pertinent to mention here that the first patient from the district who was tested positive for the virus on March 3 has recovered and was discharged from Ashwini Hospital in Cuttack on April 11. The patient, a resident of Brahmabarada area, was among the three Nizamuddin returnees who tested positive for the deadly virus in the state. Currently, he is under Government quarantine for seven days at a center in the district.