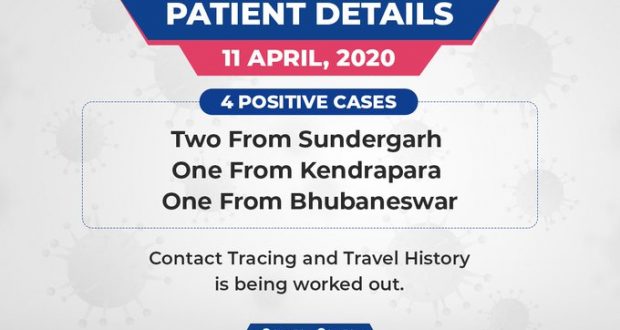 Bhubaneswar:12/4/20: The State government today released the travel history of COVID-19 Patient Nos. 50, 51, 52, 53 and 54. While the Health and Family Welfare Department shared the details of case no 50, the Information and Public Relations Department revealed details of the rest four cases.

As per the report, the patient is a 22-year-old male hailing from Unit-IV in Bhubaneswar and a close contact of case no 41.

The H&FW Dept said, the patient no 50 had stayed at home in Madhusudan Nagar, Unit-IV, Bhubaneswar and had visited a relative at Badahantuda in Banapur of Khurda on March 18-20. He had also occasional visits to friends and relatives in Unit-III, Station Square, Satya Nagar & Jharpada areas from March 20 to April 10.

The sample was collected as a contact case and tested positive on April 10. Following this, the patient was shifted to KIMS COVID Hospital in Bhubaneswar on April 10, the H&FW further stated.

Earlier today, the Information and Public Relations Department of Odisha Government, in a tweet, had revealed the details of the four people who tested positive late on April 11.

As per the report, two patients are from Sundergarh, while one each hail from Bhubaneswar and Kendrapada.

The patient no. 51 is stated to be a 67-year-old male from Bisra area in Sundargarh district with travel history to Nizamuddin, Delhi. He had left Rourkela via Utkal Express (18477) on March 5; stayed in Delhi & visited Nizamuddin from March 6 to 10; travelled from Nizamuddin to Bilaspur via Sampark Kranti (12824, S4 49) on March 10; took connecting train from Bilaspur (17007, S5-25), reached Rourkela and took a shared auto to Bisra on March 11. He was under Home Quarantine at Bisra from March 12 to April 2 and then shifted to Government Quarantine at Rourkela from April 2 to 11. Asymptomatic: Sample was collected due to travel history and tested positive on April 11. He was shifted to Hi-tech COVID Hospital in Rourkela on April 11.

The patient no. 52 is an 18-year-old male from Bisra in Sundargarh. He had come in contact with  Nizamuddin returnee on March 10. The case then travelled from Charinangal, Jajpur to Rourkela via bus on March 10 and reached Rourkela and took an auto to Bisra on March 11; Stayed at Ashiyana Masjid from March 11 to 20; Stayed at Masjid near Banar, Sundargaon from March 14 from April 5; Shifted to Government Quarantine Centre From April 11 to 5. Asymptomatic: Sample Collected due to Contact History, tested positive on April 11; Shifted to Hi-tech COVID Hospital Rourkela April 11.

The patient no. 53 is a 46-year-old male is Jharpada, Bhubaneswar and a close relative of case no. 42. He stayed at Bankuala, Kesura, Saheed Nagar in Bahaubaneswar from March 25 to April 3 and visited AIIMS as patient attendant to positive case no. 42 from April 4 to April 6. Thereafter, he remained in Quarantine from April 7 to 10. The sample was collected as contact case and tested positive on April 11. The patient was then shifted to KIMS COVID Hospital on April 11.

The patient no. 54 in a 17-year-old female from Rajanagar in Kendrapara district. She came in a private ambulance from Kolkata via Balasore and Bhadrak to Village, had tea 43 km before Bhadrak on March 29. Thereafter she remained in Home Quarantine at Naldia Village under Ostia GP, Rajnagar from March 30 to April 11. Asymptomatic: Sample was collected as part of routine surveillance and tested positive on April 11. She was shifted to Ashwini COVID Hospital on April 11.

2020-04-12
Editor in chief
Previous: About 85 lakh PMUY beneficiaries have got the LPG cylinder in April, 2020
Next: No restriction on inter-state, intra-state cargo transporation