Top Headlines
Home » National » No community transmission in the country yet and no need to panic:Health Ministry 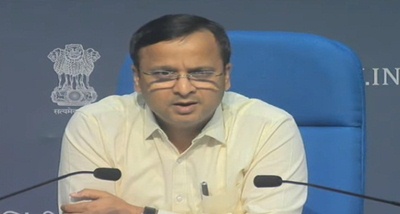 No community transmission in the country yet and no need to panic:Health Ministry

Newdelhi:10/4/20: There is no community transmission in the country yet and no need to panic, but everyone has to remain aware, Joint Secretary in Health Ministry Lav Agarwal said today. Briefing media in New Delhi, Mr. Agarwal said, yesterday, over 16 thousand tests were conducted and approximately 2 percent cases tested positive and on the basis of the samples collected, the infection rate is not high.

He said the death toll has reached 199 with 33 deaths since yesterday and 503 persons have been discharged till now after recovery. He said, there is a need for one crore hydroxychloroquine tablets and the country currently has 3.28 crore tablets.

Additional Secretary in Ministry of External Affairs and Coordinator of COVID-19, Dammu Ravi said, 20 thousand 473 foreign nationals have been evacuated till Thursday.

Mr. Dammu Ravi said Hydroxychloroquine is in high demand globally and many countries have requested for it. He said, considering domestic stock availability and country’s requirement, Group of Ministers decided to release some surplus stock for export. Mr Ravi said, exports to the first list of countries have been approved and the Government is working on 2nd and 3rd lists now. He said, however, the domestic requirement will be the priority of the government, while taking decisions on export of Hydroxychloroquine.

Joint Secretary in Home Ministry Punya Salila Shrivastava said, enforcement of lockdown is happening in the entire country and urban local bodies have strengthened their efforts in containing the spread of COVID2019 in hot spots.

She said, 37 thousand 978 relief camps and shelters have been set up and 14.3 lakh stranded migrant workers and other needy people are provided relief. Out of this, more than 34,000 relief camps set up by state governments and 3,900 camps by NGOs.

She said, a total of 26 thousand 225 food camps have been set up in the country, in which more than 1 crore people are being provided food.

Ms. Shrivastava said, Union Home Minister has held a review meeting over security at Indo-Pak and Indo-Bangladesh borders with the border security officials. He ordered to tighten security especially in the areas where there is no fencing and not to allow any cross-border movement.

2020-04-10
Editor in chief
Previous: Good Friday is being observed today by Christians all over the world to mark the crucifixion of Jesus Christ
Next: India is ready to do whatever is possible to help its friendly nations in the wake of the COVID-19 outbreak