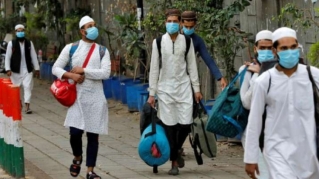 Tablighi Jamaat and their contacts 25,500 local members have been quarantined.

in National April 6, 2020 Comments Off on Tablighi Jamaat and their contacts 25,500 local members have been quarantined. 408 Views

New Delhi6/4/20:: A home ministry official today said that 25,500 local members of the Tablighi Jamaat and their contacts have been quarantined.

The official said: “Five villages in Haryana where foreign nationals, who were connected with Tablighi Jamaat, lived, have been sealed and quarantined”.

The Union Health Ministry said on Monday that of the 4,067 confirmed coronavirus cases in the country, 1,445 have been epidemiologically linked to Tablighi Jamaat congregation at Nizamuddin.

According to Lav Agarwal, Joint Secretary, Health, total number of confirmed cases in India are 4,067, including 66 foreign nationals. He said of these, 292 have recovered and 109 have died.

2020-04-06
Editor in chief
Previous: Prominent personalities from the Indian film industry lit candles and lamps responding to the PM appeal
Next: 427 persons were arrested across the state violating lock down norms