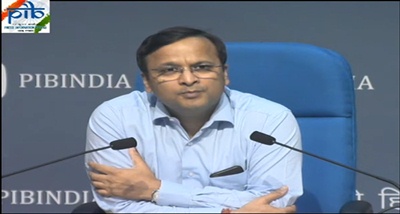 in National April 6, 2020 Comments Off on 693 fresh confirmed cases of novel coronavirus or COVID- 19 have been reported across the country 422 Views

New Delhi:6/4/20:693 fresh confirmed cases of novel coronavirus or COVID- 19 have been reported in the country in the last 24 hours taking the total number to 4067. Out of these, 291 patients have recovered and discharged from the hospitals, while 109 patients have died. Briefing media in New Delhi today, Joint Secretary, Ministry of Health and Family Welfare, Lav Aggarwal said,  76 per cent cases have been reported in males and 24 per cent in females. He also informed that out of the total cases,1445 cases are related to Tablighi Jamaat cluster. He said, out of 109 deaths so far, 63 per cent have been reported among people over 60 years age,  30 per cent in age bracket of 40 to 60 years and  7 per cent in the people below 40 years of age.  Mr. Aggarwal suggested to the high-risk people to follow the directive and guidelines issued by the government.

He also urged the countrymen to follow social distancing measures and guidelines to check the spread of the novel coronavirus.