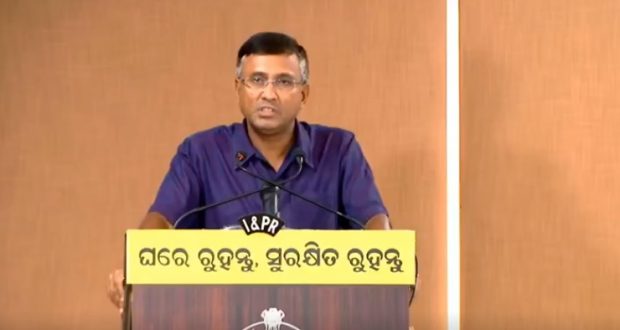 Bhubaneswar:5/4/20: Chief Secretary Sri Asit Tripathy has emphasized maintaining social distance after the shutdown period from 8 PM today. He said, “We cannot get the benefits of shut down and lockdown if we do not maintain the social distance. There is sufficient stock of essential commodities; and, people should not make a rush near the shops’.

Further Chief Secretary Sri Tripathy thanked the people of Bhubaneswar, Cuttack and Bhadrak towns who willingly cooperated to observe the shutdown for 48 hours. He also complimented the state police for enforcing the shutdown. Similarly, he thanked the Municipal authorities, health authorities and the district administration for the meticulous planning and execution with a great deal of professionalism.

He said, ‘the surveillance teams are tracking all possible contacts of the positive cases and carrying out door to door surveillance in the Containment Zones. As a result, both in Surya Nagar and Bomikhal several more positive cases have been found. While further tracking and testing wherever necessary will be undertaken aggressively and the findings have attentively established that the infection was brought from outside the state. To that extent, our fear of community transmission has been allayed’.