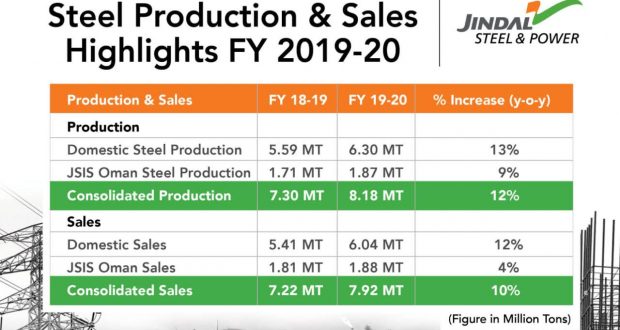 in Business, National April 4, 2020 Comments Off on JSPL shines with promising figures, achieves new milestones in production and sales in FY20 447 Views

Mr. VR Sharma (Managing Director- JSPL) attributed these achievements to the perseverance of JSPL’s workforce across the globe.

He said “It is truly a splendid achievement. The 3.00 MTPA figure from the newly installed Angul plant was a dream, which comes true now. Raigarh has already achieved this milestone twice earlier.  India’s largest Blast furnace at Angul continue to produce more than 10000 MT/day of hot metal and World only SynGas based DRI Plant is running well, which will lead to creating new records in future”

“Oman has also shown incredible performance. The EAF in Oman has produced 2,02,110 tonnes of steel in one month, which is again a record for the plant of its kind.  We will aim to do much more in this new financial  year.” Mr. Sharma further added.

2020-04-04
Editor in chief
Previous: BMC has roped in three agencies for the supply of essential commodities in Surya Nagar locality
Next: PM chairs meeting of Empowered Groups : Reviews countrywide preparedness on COVID-19