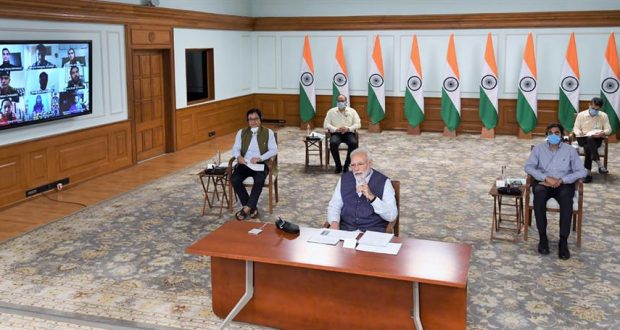 Prime Minister said that COVID-19 is an adversary of the entire humanity and the gravity of the situation can be ascertained from the fact that for the first time since World War II, the Olympics has been postponed. Several other prominent international sporting events like Wimbledon and domestic sporting events like Indian Premier League for cricket have been shifted as well due to the challenges created by the pandemic.

Prime Minister praised the sportspersons for bringing glory to the nation through stellar performances on the field. Now they have a very important role to play in boosting the morale of the nation as well as spreading the message of social distancing along with asking people to continuously follow advisories given during lockdown. He underlined that the traits learnt in sports training viz the ability to face challenges, self-discipline, positivity, and self-belief are the essential tools to combat the spread of the virus.

Prime Minister asked them to include the following five points in their message to people: ‘Sankalp’ to fight the pandemic, ‘sanyam’ to follow social distancing, ‘sakaratmakta’ to maintain positivity, ‘Samman’ to respect the frontline soldiers in this battle including the medical fraternity, the police personnel, etc and ‘sahyog’ at personal level as well as at national level through contribution to PM-CARES fund. He also asked them to highlight the importance of both physical and mental fitness and also popularize guidelines released by AYUSH Ministry.

The sportspersons praised the leadership of the Prime Minister in this challenging time. They also thanked him for ensuring that the frontline health care workers and police personnel involved in this battle get the respect they truly deserve for their selfless service. They talked about the importance of discipline, mental strength, following a fitness regimen and taking steps to boost immunity.

Prime Minister mentioned that it is imperative India emerges victorious in this battle against the pandemic and expressed confidence in pro-active participation by the sportspersons in this battle.

2020-04-03
Editor in chief
Previous: Cuttack-Barabati MLA , who had also attended the Tablighi Jamaat congregation has tested negative
Next: Veteran Bollywood actors have condemned the attack on medical professionals in Indore