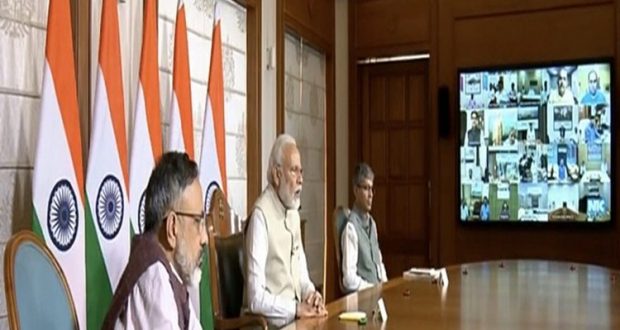 in National March 29, 2020 Comments Off on PM Modi continues his address with various stakeholders in India’s fight against COVID-19 378 Views

Newdelhi:29/3/20:Prime Minister Narendra Modi is continuing his interactions with various stakeholders in India’s fight against COVID-19. Mr Modi interacts with over 200 people on a daily basis which includes phone calls to various State Governors, Chief Ministers, and Health Ministers to get a first-hand feedback on India’s fight against the COVID-19 menace.

He also telephonically reaches out to various doctors, nurses, health workers, and sanitation staff from various corners of the country in order to encourage them and to pay gratitude to their yeomen service to the nation and society.

Prime Minister has held discussions through video conferencing with the heads of various Electronic Media groups and Print Media groups and appealed that media should counter pessimism and panic through positive communication. On Friday, Prime Minister held a video conference with various Radio Jockeys and announcers of All India Radio. Mr Modi said, there is a need to constantly celebrate the contribution of the local heroes at national level and boost their morale.

Mr Modi in a special video interaction on 25th of this month with his constituents in Varanasi has appealed for resolve, restraint and sensitivity and exhorted the people to adapt to the best practices in fighting the virus.

Since January Prime Minister held several rounds of meetings and discussions on a daily basis wherein he is d regularly by the Cabinet Secretary and the Principal Secretary to the Prime Minister’s Office. Mr Modi is also being d by the Group of Ministers (GoM) set up under the chairmanship of the Minister for Health and Family Welfare Dr Harsh Vardhan on the steps being taken by the Government.

While preparing the nation successfully in an effort to maintain Social Distance, the Prime Minister in his address to the nation on 24th March appealed for a 3 week lockdown as it is the only known effective measure in controlling the spread of the virus. In his address the Prime Minister requested the people against panic buying and assured them of the constant supply of essential goods.

To deal with the economic challenges caused by the pandemic, Prime Minister announced the creation of ‘COVID-19 Economic Response Task Force’ under the Union Finance Minister. The Task Force will consult stakeholders, take feedback, on the basis of which decisions will be taken to meet the challenges.

Prime Minister also urged the business community and higher income groups to look after the economic needs of those from lower income groups, from whom they take various services, urging them not to cut their salary on the days they are unable to render the services due to inability to come to the workplace.

Keeping in mind the need for having a dedicated national fund with the primary objective of dealing with any kind of emergency or distress situation, like posed by the COVID-19 pandemic, and to provide relief to the affected, a public charitable trust under the name of ‘Prime Minister’s Citizen Assistance and Relief in Emergency Situations Fund’ (PM CARES Fund)’ has been set up. Prime Minister is the Chairman of this trust and its Members include Defence Minister, Home Minister and Finance Minister.

The Narendra Modi Government on 26th March announced a Financial Package of Rs 1.7 Lakh Crore which focuses on emergency cash transfers for the poor. The Package also includes a 3 month free supply of  foodgrains, pulses and gas under the Pradhan Mantri Garib Kalyan Yojana in order to support them from the economic vagaries arising out of the impact of the Corona Virus.

In an effort to maintain the regular supply of medicines and medical equipment, the Prime Minister also held a video conference with the Pharma Sector representatives on 21st March. In his interaction the Prime Minister asked the Pharma industry to work on manufacture of RNA Testing Kits for COVID-19 on war footing. He assured them that the Government is committed to maintaining supply of APIs and manufacture within the country.

In an effort to keep the nation healthy, the Prime Minister also interacted with various AYUSH Practitioners yesterday.

2020-03-29
Editor in chief
Previous: Indian Railways gears up to provide cooked food to needy people in times of lock down.
Next: 979 confirmed corona-virus cases and six deaths have been reported from six states