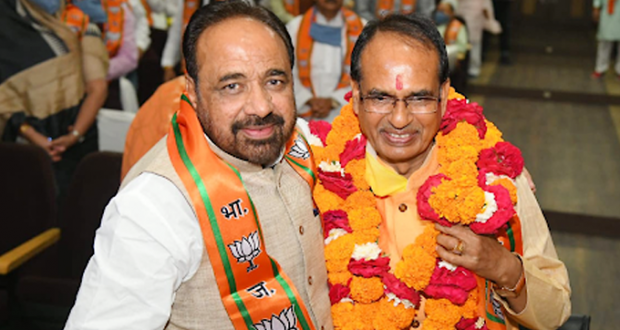 in National, Politics March 23, 2020 Comments Off on Shivraj Singh Chauhan has become Chief Minister of Madhya Pradesh for the fourth time 729 Views

Madhya Pradesh:23/3/20:In Madhya Pradesh, senior BJP leader Shivraj Singh Chauhan has become Chief Minister of the state for the fourth time. Governor Lalji Tandon administered him the oath of office and secrecy at a simple ceremony held at Raj Bhavan, a short while ago. Mr Shivraj Singh took oath alone due to the outbreak of Corona virus. Earlier, Mr Chauhan was unanimously elected as the BJP Leader of the Legislative Party in a special meeting held this evening.  Mr Gopal Bhargava proposed the name of Mr Chauhan and was approved by several members.

BJP’s Central Observer Arun Singh and State in-Charge Vinay Sahastrabuddhe attended the meeting through video conferencing. Mr Chouhan worked as the Chief Minister of the state for almost thirteen years and resigned in December 2018. After the Assembly elections, senior Congress leader Kamal Nath was sworn in as Chief Minister on 17th of December.

Amid the rebellion and a spate of resignations of 22 MLAs, who were supporters of senior leader Jyotiraditya Scindia, Mr Kamal Nath has resigned as Chief Minister on 20th of March after a stint of nearly fifteen months. Mr Scindia and his supporters have since joined the BJP.

2020-03-23
Editor in chief
Previous: Complete lockdown enforced in 19 States and Union Territories
Next: All domestic commercial airlines will cease their operations from tomorrow mid-night.