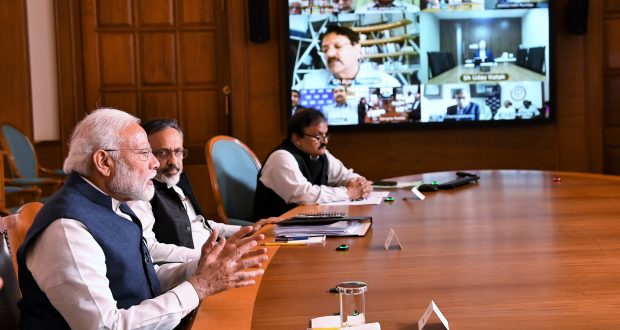 The Prime Minister, Shri Narendra Modi interacting with the industry representatives via video conference in Indias fight against COVID-19, in New Delhi on March 23, 2020.

in National March 23, 2020 Comments Off on Prime Minister to continue his interactions with various stakeholders in India’s fight against COVID-19 470 Views

Shri Modi, in his effort to contain the spread of the virus, has held discussions with the heads of various Electronic Media groups and the India Inc. through video conference today.

Since January Prime Minister Shri Modi held several rounds of meetings and discussions with people from various walks of life and officials in order to find ways and means to fight COVID-19.

Prime Minister had been holding meetings on a daily basis wherein he is updated regularly by the Cabinet Secretary and the Principal Secretary to the Prime Minister’s Office.

Prime Minister is also being updated by the Group of Ministers (GoM) set up under the chairmanship of the Minister for Health and Family Welfare Dr Harsh Vardhan on the steps being taken by the Government.

The Prime Minister announced that he would not be participating in the Holi festivities in an effort to make people maintain social distancing.

Address to the Nation – Janta Curfew

In order to prepare the country to deal with the COVID-19, the Prime Minister in his address to the Nation on the 19th of March 2020, urged the people to voluntarily participate in the Janta Curfew for 14 Hours from 7 AM to 9 PM on the 22nd of March 2020.

Shri Narendra Modi, gave to the nation his two pronged mantra of “Resolve and Restraint” in order to fight the Corona Virus.

In his address the Prime Minister requested the people against panic buying and assured them of the constant supply of essential goods.

Prime Minister also urged the business community and higher income groups to look after the economic needs of those from lower income groups, from whom they take various services, urging them not to cut their salary on the days they are unable to render the services due to inability to come to the workplace. He stressed on the importance of humanity during such times.

In an effort to maintain the regular supply of medicines and medical equipment, the Prime Minister also held a video conference with the Pharma Sector Representatives on the 21st of March 2020. In his interaction the Prime Minister asked the Pharma industry to work on manufacture of RNA Testing Kits for COVID-19 on war footing. He assured them that the Government is committed to maintaining supply of APIs and manufacture within the country.

He directed them that it is important to maintain supply of essential medicines and prevent black marketing and hoarding.

Working together with the States

On the 20th of March the Prime Minister interacted with all the Chief Ministers of the country through a video conference where in had called for tackling the challenge together. Prime Minister called for a constant vigilance and monitoring of spread of the virus and that Centre and States must work together to combat the pandemic.

Prime Minister reminded the State Leadership that the country is in a critical phase of tackling spread of the virus but assured them that there is no need to panic.

The Chief Ministers were briefed on the steps taken by the Central Government so far and how the Prime Minister is personally monitoring the overall situation in the country.

During their presentation, when the Chief Ministers requested for augmenting of testing facilities and greater support to vulnerable sections of the society, the Prime Minister assured his support to the states and talked about the urgent need for capacity building of healthcare workers and augmentation of healthcare infrastructure. He suggested that the Chief Ministers should do video conference with trade bodies in their states to prevent black marketing and undue price rise. He urged them to use soft power of persuasion as well as legal provisions, wherever necessary.

Prime Minister is the first leader to have suggested for a regional consultation and discussion when he called for a video conference with the leaders of the SAARC Nations, home to significant portion of the World’s population. A meeting of the SAARC leaders under India’s leadership was held on the 15th of March 2020.

Shri Modi led the way, in the spirit of collaboration and proposed creation of a COVID-19 Emergency Fund based on voluntary contributions from all the countries, with India making an initial offer of US $10 million for the fund. The fund can be used by any of the partner countries to meet the cost of immediate actions.

Other SAARC Nations viz Nepal, Bhutan and Maldives have also contributed to the Emergency Fund.

India under the leadership of the Prime Minister evacuated over 2000 citizens struck in the hot beds of the Corona Virus like China, Italy, Iran and other parts of the World.

2020-03-23
Editor in chief
Previous: Odisha Government has extended the lockdown from 5 districts to 14 districts
Next: Complete lockdown enforced in 19 States and Union Territories