Top Headlines
Home » International » Deaths from the Corona virus pandemic have crossed 15,000 across the globe 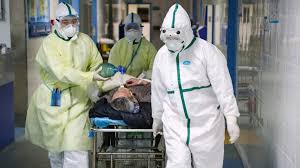 Deaths from the Corona virus pandemic have crossed 15,000 across the globe

in International March 23, 2020 Comments Off on Deaths from the Corona virus pandemic have crossed 15,000 across the globe 572 Views

Newdelhi:23/3/20:Deaths from the Corona virus pandemic have crossed 15,000 across the globe, according to official figures. A total of 15,189 deaths have been recorded, the majority in Europe with 9,197 fatalities. Italy is the hardest-hit country with 5,476 deaths, followed by China where the virus first emerged last year with 3,270, and Spain with 2,182.
With a total of 1,395 new deaths reported in the past 24 hours out of 1,72,238 officially declared cases, Europe is now the continent where the virus is spreading the most rapidly.

In Spain, the death rate showed a 27 per cent increase on the figures released a day earlier, with the number of confirmed cases of COVID-19 rising to 33,089. Iran has reported another 127 Corona virus deaths, bringing its death toll to 1,812 amid 23,049 confirmed cases. Iran is battling the worst outbreak in the West Asia and has faced widespread criticism for not imposing stricter quarantine measures early on. Nigeria reported its first death from Corona virus today as confirmed cases of infections in Africa’s most populous nation climbed further.

2020-03-23
Editor in chief
Previous: All domestic commercial airlines will cease their operations from tomorrow mid-night.
Next: Canada became the first major country to withdraw from 2020 Tokyo Olympic