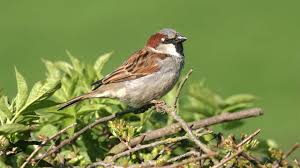 Newdelhi:20/3/20:Today is World Sparrow Day. Every year March 20 is observed as World Sparrow Day to raise awareness about the bird. The need for marking this day was felt due to the tremendous decrease in its population. The house sparrow is on the verge of extinction.

The initiative was started by Nature Forever Society (NFS) of India, founded by Mohammed Dilawar, an Indian conservationist. He started his work helping the house sparrow in Nashik. He was also named one of the Heroes of the Environment for 2008 by Time magazine for his efforts. The first World Sparrow Day was celebrated in 2010 in different parts of the world.

Increased use of pesticides, change in the pattern of buildings and gardens missing from the houses have become the main factors why the number of sparrows has declined sharply in the past few years. Also, the radiation from the mobile and the TV towers has also been a cause of death of sparrows. Birds navigate by sensing the earth’s magnetic fields and mobile radiations are known to disturb them and interfering with bird’s ability to move around.

2020-03-20
Editor in chief
Previous: Four convicts in Nirbhaya gangrape and murder case were hanged to death
Next: Prime Minister Narendra Modi interacted with Chief Ministers of all states to combat COVID-19.