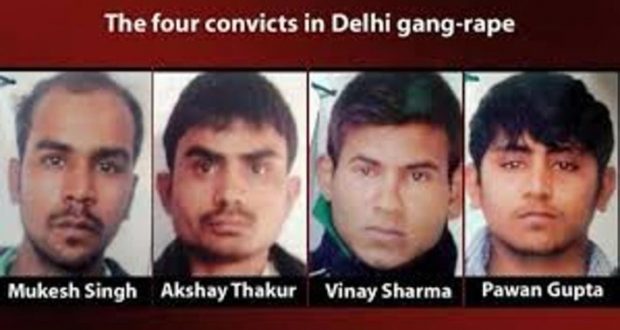 in National March 20, 2020 Comments Off on Four convicts in Nirbhaya gangrape and murder case were hanged to death 407 Views

Newdelhi:20/3/20:Four convicts in Nirbhaya gangrape and murder case were hanged to death at Tihar jail in Delhi early this morning. The executions were carried out after the convicts exhausted every possible legal avenue to escape the gallows.

Delhi High Court and Supreme Court last night dismissed a last-minute plea by the convicts, paving the way for the execution. This is for the first time that four men were hanged together in Tihar Jail.

Nirbhaya, a para-medic student, was gangraped by six men in a moving bus in South West Delhi in December 2012. One of the accused killed himself in jail and the sixth-  a juvenile – was released from a reformation home after serving a three-year term. Reacting to the development, Nirbhaya’s mother thanked Indian judiciary for doing justice to Nirbhaya and millions of women across the country.

National Commission for Women, NCW chairperson Rekha Sharma said, Nirbhaya has finally got justice and will finally be at peace. She hoped that the case will play as deterrent for others and no such case in future should take this long to deliver justice. She said, NCW salutes the courage shown by Nirbhaya’s mother Asha Devi through these years.

Ms Sharma said, it was a long painful wait for the parents and for all. She said, this case also showed people the loopholes of legal system, which the four convicts took advantage of. She stressed on the need to establish Fast Track Courts to handle such gruesome crimes and deliver justice on time in future.

2020-03-20
Editor in chief
Previous: Odisha government has issued new guidelines for work schedule and modified the timings for govt and private offices.
Next: World Sparrow Day observed Every year March 20