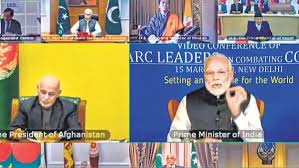 in National March 15, 2020 Comments Off on PM Modi calls upon SAARC countries to work together for combat against COVID 19 387 Views

Newdelhi:15/3/20:Prime Minister Narendra Modi today proposed the creation of a COVID 19 emergency fund based on voluntary contribution from SAARC nations. He said India can start with an initial offer of 10 million dollars for this fund. Mr Modi said India is assembling a Rapid Response Team of doctors and specialists, along with testing kits and other equipment. They will be on stand-by to be placed at SAARC nation’s disposal, if required. Leading India at the video conference of all SAARC member countries to chalk out a common strong strategy to fight COVID-19 in the region, Mr Modi said India had set up an Integrated Disease Surveillance Portal to better trace possible virus carriers and the people they contacted. This Disease Surveillance software could be shared with SAARC partners. Prime Minister Modi said SAARC nations could create a common Research Platform to coordinate research on controlling epidemic diseases within South Asian region. The Indian Council of Medical Research can offer help coordinating such an exercise.

Mr Modi said SAARC countries must prepare together, act together and succeed together in dealing with the COVID 19 situation. In his opening remarks at the video conference of all SAARC member countries to chalk out a common strong strategy to fight COVID-19 in the region, Mr Modi said sharing perspectives is most valuable as it cannot be predicted with certainty how the situation will unfold despite best efforts. He said so far SAARC region has fewer than 150 cases but there is a need to remain vigilant as the region is home to one fifth of humanity.

Sharing India’s experience of combating the spread of the virus so far, the Prime Minister said “prepare but do not panic” has been the guiding mantra. He said India was careful to not underestimate the problem but also to avoid knee jerk reactions. He said India started screening entry into the country from mid January itself while also increasing restrictions on travel. He said the step by step approach has helped avoid panic. Mr Modi highlighted that there were increased public awareness campaigns on TV and social media and special efforts were made to reach out to vulnerable groups.

Mr Modi also stated that diagnostic capabilities were increased. He said within two months, India moved from one major facility for pan India testing to more than 66 such labs and developed protocols for each stage of managing this pandemic. He said nearly 1400 Indians have been evacuated from different countries. He said a protocol has been built for such evacuations including carrying out testing by India’s mobile teams deployed abroad.

In his concluding remarks, Prime Minister Modi said that we have to fight this battle together and we have to win it together. He said, our neighbourhood collaboration should be a model for the world. Mr Modi also assured that India will do its best for its neighbours. He said, we should identify nodal experts from each of our countries and they can have a similar video-conference one week from now, to follow up on our discussions.

Sri Lankan President Gotabaya Rajapakse thanked Prime Minister Modi for offering assistance like testing kits to regional countries. He said the biggest challenge is to stop the virus from spreading within Sri Lanka. He said in view of this, Sri Lankan President has banned tourists entering the country. He emphasised the need for South Asia to share ideas and best practices in order to face up to the challenge of the rapid spread of the virus.

Afghanistan President Ashraf Ghani welcomed various new initiatives suggested by Prime Minister Modi and suggested all countries to keep a close focus on the next months on the evolving situation. He said there is a need for a common cooperative framework to fight the pandemic of COVID 19.

Prime Minister of Bhutan Dr. Lotay Tshering welcomed the setting up of COVID Relief Fund and acknowledged the contribution of health care professionals in combating the virus. State Minister of Health, Pakistan Dr. Zafar Mirza observed that his country shares the common regional concerns on the virus. He said that while hoping for the best, they also have to prepare for the worst. Earlier, Mr Modi had expressed desire that the leadership of SAARC nations should chalk out a strong strategy to fight Corona virus.