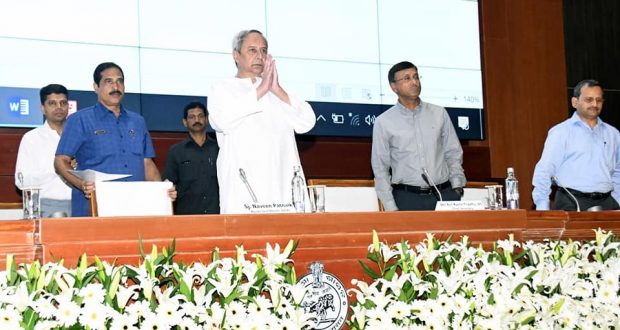 Bhubaneswar:13/3/20: As the coronavirus outbreak continues to wreak havoc across the globe, the Government of Odisha today declared the lethal disease caused by the novel coronavirus as a “state disaster.”

The same was announced by Chief Minister Naveen Pattnaik. The decision came after the high-level cabinet meeting that was held today.

The state government has also directed the closure of all schools till March 31. Similarly, movie theatres, swimming pools across the State are also advised to remain shut to avoid the spread of infection. An amount of Rs 200 crore has been earmarked to combat the threat of the pandemic. 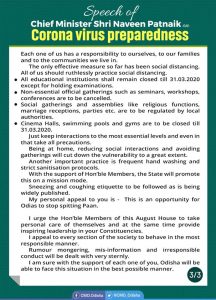 – All educational institutions shall remain closed till 31 March 2020 except for holding examinations.

– Non-essential official gatherings such as seminars, workshops, conferences are to be cancelled.

– Social gatherings and assembles like religious functions, marriage receptions, parties, etc. are to be regulated by local authorities.

Besides, the Odisha Chief Minister also stated that “Sneezing and coughing etiquettes to be followed as is being widely published.” “This is an opportunity for Odias to stop spitting paan,” Patnaik added.

Though no one has been yet detected with the disease in Odisha, the State Government is taking all necessary steps to prevent the outbreak here.