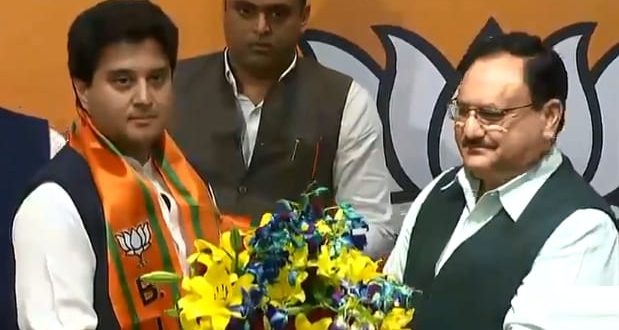 He was welcomed by the party’s president JP Nadda at BJP headquarters in New Delhi. Nadda remembered his grandmother and party’s co-founder late Vijaya Raje Scindia.

Jyotiraditya Scindia said that future of the country is firmly safe in hands of Prime Minister Narendra Modi.

Scindia will likely take around 22 MLAs with him, who also will join the saffron party.

Scindia was associated with the Congress for the last 18 years. His family has a long-standing association with the Congress party. Jyotoraditya Scindia’s father late Madhavrao Scindia has been a Congress stalwart during his time.

Peeved with his marginalisation in the Congress, Scindia met Union Home Minister Amit Shah on Tuesday and tendered his resignation from Congress membership to Sonia Gandhi.

In his resignation letter to Sonia Gandhi, Jyotiraditya Scindia said it is time for him to move on.

2020-03-11
Editor in chief
Previous: BJD candidates for four Rajya Sabha seats filed their nominations
Next: BJP may not contest, all the four BJD Rajya Sabh nominees may be elected