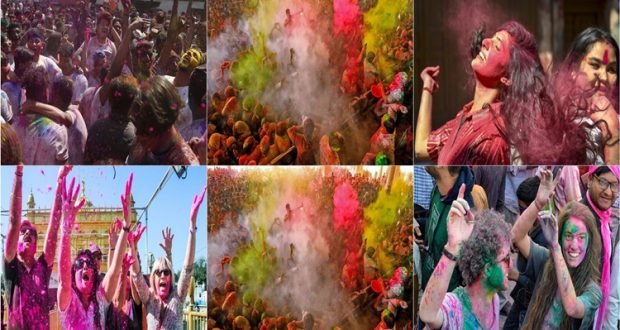 Kathmandu: Nepalese people throw colors on each other and dance as they celebrate Holi festival in Kathmandu, Nepal, Monday, March 9, 2020. Coronavirus fears forced many Nepalese to stay away from the festivities that marks the advent of spring. AP/PTI(AP09-03-2020_000082B)

Festival of colours Holi being celebrated across the country

in National March 10, 2020 Comments Off on Festival of colours Holi being celebrated across the country 1,024 Views

Newdelhi:10/3/20:Festival of colours Holi is being celebrated across the country today. The festival signifies the victory of good over evil and the arrival of spring.

In a message, President said, the Festival of Colours signals the end of winter and the advent of spring. Mr Kovind said, as the harbinger of hope, Holi has a special place in the cultural calendar.

The President said, its celebrations across the country are marked by a rare vivacity across generations.

Mr Kovind said, Holi, with its myriad colours, is also the best reflection of Indian diversity and multicultural heritage. He hoped that the festival will strengthen the faith in the cherished national values and promote the good for all.

In his message, Vice President said, Holi festival is a time for family and friends to come together and rejoice in the spirit of unity, brotherhood and affection. Mr Naidu said, the lighting of the bonfire on the eve of Holi symbolizes the triumph of virtue over evil.

The Vice President said, Holi is also a celebration of the beauty and bounty of nature and the festival signifies the end of winter and the beginning of summer.

He called upon people to strive to strengthen the bonds of friendship and amity in Holi which hold the society together.

Mr Naidu hoped that the festival will break the barriers that divide people and unite everyone in the quest for shared prosperity, peace, progress, harmony and joy.

In a tweet, Prime Minister Modi hoped that the festival of colours will bring joy and happiness in the life of all the countrymen.

Delhi Police has made elaborate traffic arrangements to ensure the safety of motorists and check the incidents of drunken driving on Holi. Over 170 traffic pickets have been set up to ensure a peaceful and safe Holi celebration.

Delhi traffic police has deployed around 1,600 staff for the purpose.

In an advisory Delhi traffic police has asked motorists to obey traffic rules on the day of the festival.

As per the directions issued by the Supreme Court committee on road safety, in cases of drink driving, traffic light violations, usage of mobile phone while driving, and over speeding, the offender’s driving license will be seized and liable for suspension for at least three months.

Delhi Police has also advised parents to not allow their minors drive vehicles.

Special checking teams with alcometers will be deployed at major intersections and vulnerable points to detect and prosecute traffic violations.

Rashtrapati Bhavan will not hold the traditional Holi gatherings this year as a precautionary measure in view of the coronavirus outbreak.

In a tweet, Prime Minister Narendra Modi had said that experts across the world have advised to reduce mass gatherings to avoid the spread of COVID19 Novel Coronavirus.

Hence this year, he has decided not to participate in any Holi Milan programme.

Meanwhile, Holi Purnima was celebrated in different parts of Mahrashtra with traditional fervor by making bonfire and burning effigy of Holika.

In Mumbai, the holi purnima celebrations were based on the various themes like hanging of Nirbhaya Case convicts and Coronasur dahan.

In fishermen colonies near the Mumbai coast, the fishermen community also celebrated the festival by Holika Dahan and dancing on the tunes of Koli folk songs.

Although today’s celebrations which is known as Dhulwad or Rangpanchami in Mumbai are under the cloud of Covid-19 fear.

Especially Marathi celebrities have decided not to celebrate the festival as usual by gathering together.

Many people including children have decided not to participate in public gatherings and celebrate it with the local friends.

In Uttar Pradesh, holi is being celebrated with a great deal of joy and enthusiasm. AIR correspondent reports that police have made elaborate arrangements to prevent any untoward incident during the festival.

Meanwhile, Holi is being celebrated with traditional fervours and enthusiasm in Gujarat. AIR correspondent reports that the mass celebrations of Holi festival have been cancelled following threat of Corona Virus.