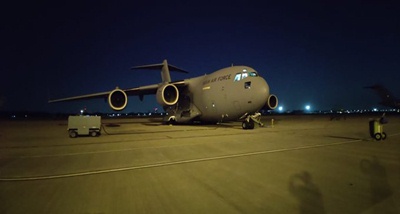 Newdelhi:10/3/20:The first batch of 58 Indian pilgrims from Tehran, Iran landed at the Indian Air Force Station at Hindon in Ghaziabad this morning. The passengers are being screened by medical experts. They were brought by C-17 Globemaster military aircraft from the Corona virus-hit Iran.

External Affairs Minister Dr S. Jaishankar thanked Indian Embassy in Iran for their efforts and the Indian medical team there, for operating under challenging conditions and also the Indian Air Force and also appreciated the Iranian authorities for their cooperation.

The Minister also said that the government is working on the return of other Indians stranded in Iran.

2020-03-10
Editor in chief
Previous: Festival of colours Holi being celebrated across the country
Next: World Health Organization has said Coronavirus has spread in over 100 countries.