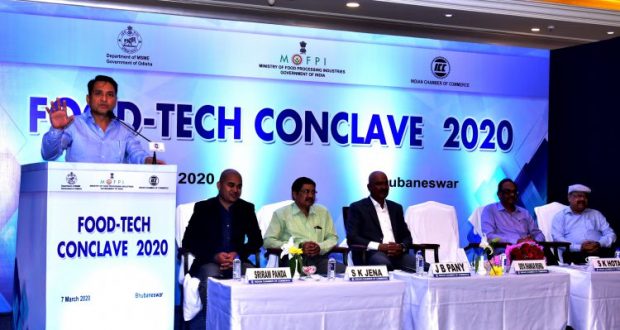 in State News March 7, 2020 Comments Off on Odisha Industries Minister revealed that the new food processing policy of the state is under process 422 Views

Bhubaneswar:7/2/20: Odisha Industries Minister Captain Dibya Sankar Mishra today revealed that the new food processing policy of the state is under process. The last policy was unveiled in 2016. Mishra said, “In every five years we have the plan to make fresh policy taking the market situation into consideration. Odisha Food Processing Policy 2021 will be unveiled very soon.” He also invited suggestions from stakeholders of the food process industry.

The industries minister today inaugurated the Food Tech Conclave organized by the Ministry of Food Processing of Government of India, in collaboration with Odisha Food Processing Ministry, Odisha MSME department and Indian Chamber of Commerce (ICC) Odisha State Council at Hotel Mayfair Lagoon. On the occasion, Mishra said that in the next 3-5 years Odisha is poised to become a 33 billion dollars food processing industry. There is a huge scope for local and young entrepreneurs of the state to leverage those benefits.

Talking about huge scope in the state he said that, “In Kalahandi district, our farmers cultivate Lal Mahal rice which is produced organically having better digestive value than Basmati like costly rice available in the market. But we are unable to make it a brand. Time has come to identify this type of unique agricultural product and send them to market which will become helpful to increase the income level of our farmers.”

Additional secretary of Agriculture and farmer’s empowerment department of Odisha Manmath Kumar Pani discussed huge opportunity lies in cereal in the state. He said, “Odisha exceeds self-sufficiency level in cereals. Through cereals, we can increase our farmer’s income marginally. Odisha produces 10.76 lakh MT of cereals, 90 lakh MT vegetables, 21 lakh MT key food products, 3.35 lakh MT of sweet potato, 0.88 lakh MT cashew, 13 lakh MT Tomato and 5 lakh MT of spices.”Director of Industry S K Hota said, “Odisha is the third-largest producer of cashew nut, fourth-largest producer of vegetables and scrimps, the sixth largest producer of coconut and major producer of paddy, oilseeds and sweet potato, corn, chilly, gingers, fibres like cotton and jute also. We have a target to process 25% of agriculture produce in the state by 2025 which is a very tuff task.

Co-chairman of ICC Odisha State Council JB Pany said, “More than 20 per cent of our vegetables get wasted and less than one per cent processed which is lower than 6 per cent of the national average. Some developing countries have an average of more than 50 per cent.”

Other dignitaries present at the event were director of the directorate of export, promotion, and marketing, Odisha Saran Kumar Jena, convenor of Agri and Food Processing Committee of ICC Odisha State Council Sriram Panda and representatives from Food Processing industry.

2020-03-07
Editor in chief
Previous: Central University of Odisha organised a workshop on “Fine Tuning Research Planning”
Next: ‘Anu Didi Not Out’ All Set For Release On International Women’s Day