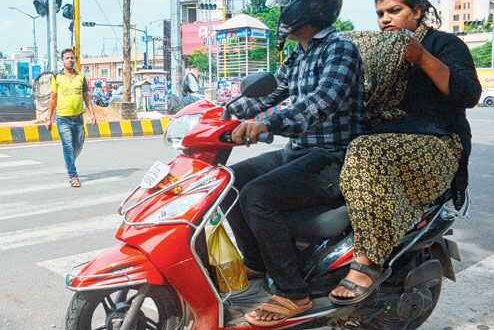 in Smartcity Bhubaneswar, State News March 2, 2020 Comments Off on Wearing helmets for pillion riders and using seat belts for occupants in four-wheelers are mandatory 589 Views

Bhubaneswar,:2/3/20 Wearing helmets for pillion riders and using seat belts for occupants in four-wheelers are mandatory in Odisha from today (March 1) as the three-month relaxation on enforcement of the amended Motor Vehicle Act- 2019 ended on February 29.

The drive against violation of traffic rules will be intensified from today with completion of the extended three-month relaxation period, said senior official of state commerce and transport department.

There will be strict enforcement against drunken driving, over speeding, driving against flow of traffic, using mobile while driving, dangerous driving, triple riding on two-wheeler, over loading, jumping red light, not wearing helmet and seat belt and not having required driving license, insurance and vehicle registration from tomorrow, said a senior official of the Regional Transport Office 2, Bhubaneswar.

The State Government had implemented the Act on September 1, but deferred it till December 6 in view of public resentment against it due to high penalty amounts and further till February 29.

Granting the last extension of three months till February end, State Commerce and Transport Minister Padmanabha Behera had said that the extension is being granted for the last time and no further extension will be granted.